Last couple of weeks have flash-pointed challenges and prospects of Afghan peace deal with different actor’s influences for win-win policies of global sustainability and diplomacy. The War on Terror that influenced America’s dominance on stable allies estimated billions of dollars for US to spend on global security and ideology of “political democracy.” Political scientists and […] 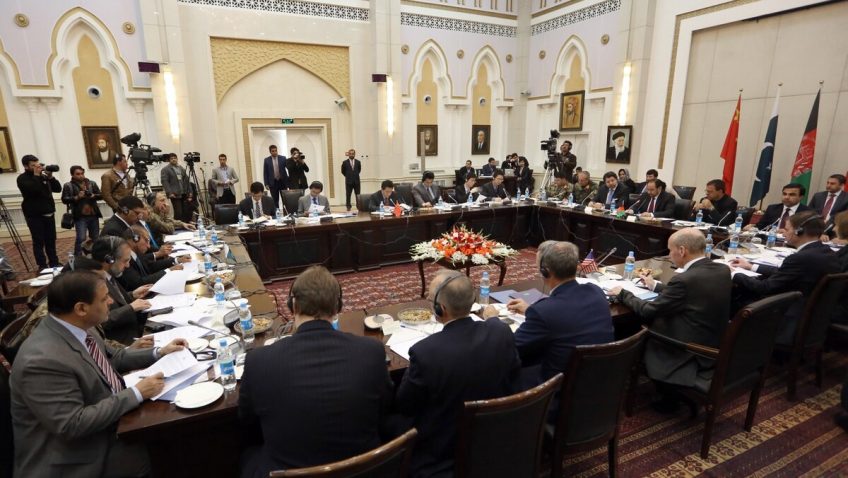 Delegations from Afghanistan, Pakistan, The United States of America and China discuss a road map for ending the war with the Taliban at the Presidential Palace in Kabul, Afghanistan, Monday, Jan. 18, 2016. Representatives of four countries met in the Afghan capital Kabul on Monday for a second round of talks aimed at bringing an end to Afghanistan's war by charting a roadmap to peace, a Foreign Ministry official said. (AP Photo/Rahmat Gul)

Last couple of weeks have flash-pointed challenges and prospects of Afghan peace deal with different actor’s influences for win-win policies of global sustainability and diplomacy. The War on Terror that influenced America’s dominance on stable allies estimated billions of dollars for US to spend on global security and ideology of “political democracy.” Political scientists and strategist from global actors have estimated the new era challenges and optimistic end to long Afghan war or the War on Terror that shows estimated casualties and loses—- 800,000+ people killed and at least 37 million people displaced as per Wikipedia. Despite growing facts of “hot conflicts”, there has been decay of political stability, raising of social issues, immigration, diplomacy of weaponisation capabilities, economic inflation, and Geo-political confrontation in South-Asia—Indo-Pacific sea. The greatest stratagem that one of the Raising Asian calm giant wanted to push is accelerating economic development in the initiative of “OBOR” One belt one road or BRI-belt road initiative. Whether the global influences dominate future peaceful grounds, it is to look over the following analysis of various roles of state actors in the new era of peaceful coexistence, end to long Afghan war and undisturbed neighbors.

Afghan peace process and Islamabad security Dialogue
On 18 March, 2021 US Department of State brought up joint statement on peaceful settlement in Afghanistan. US, Russia, China and Pakistan were a part of the settlement. They agreed on participation of 10 points negotiations which were mainly for sustainable peace, reducing violence, comprehensive ceasefire to end long four decade Afghan war, political resolution for security, protection of socio-economic developments, and UN to play a peaceful role in Afghan reconciliation process.
On the other hand, Pakistan Chief of Army stuff, General Qamar Javid Bajwa speech at Islamabad Security dialogue focused on various layers of national security and impacts of Cold War era. Further, he talked about the multi-dimensional challenges of Pakistan and the future of the State in geopolitical South Asia. Army Chief’s statement was a gesture to energies Afghan Pakistan transit trade agreement and play a vital role as a bridge access to India in peaceful settlement. For stabilizing peace in South Asia, Pakistan acknowledged to bridge with Afghanistan by inviting Afghanistan in CPEC initiative.
The security dialogue is a statement exclusively focused on Geo-economic vision linked with Xi’s BRI and a peaceful neighborhood. To be clear on certain grounds, BRI has been transforming issues related to political correctness, social developments and not only to economic development in particular. Moreover, the world developmental strategist opinions have shifted the idea that the powers of the states linked with massive military power is not the only structure that attracts global power but economy that has a vital influence and power capabilities. There is no deny in fact that raising Asian oyster—-China is accountable constantly towards growth in Southern countries of Asia. What is  learned from the Islamabad security dialogue and US statement? Pakistan has played its role significantly stable to security dynamics and focusing on technology benefits, human development as stated by the Army Chief and a peaceful South-Asia inclusively Kashmir issue which needs moral satisfaction from India.
Furthermore, Former US Secretary of State Henry Kissinger recognized Pakistan’s pivotal role by its visit from Islamabad to Beijing in 1971 where Pakistan role in establishing US-China relations was highly prioritized. If the Current analysis from the Afghan peace process acknowledges it outcomes, tomorrow’s South Asia growing capabilities end the long crisis of unstable relationships but Is it true that US leaves Afghanistan with the following promises?
A survey by US National Opinion Research Center (NORC) in 2020 shows 59% People responded on with-drawling troops from Afghanistan while other surveys didn’t have a degree for people to answer the question of US troops in Afghanistan. Thus, it is still a debate that “Will the US government decide to withdraw its troops?” Correspondingly, withdrawing troops from Afghanistan is not as difficult for US however, there remains some footprints that may unstable Afghan soil and impact the regional peace.

US defense secretary visit to India- Expectations and Realities
Likewise, the first overseas trip visit of US Defense Secretary from Biden Administration pinned India for defense relationships as by analysts. On the other hand, Pakistan Army chief dialogue is providing a peaceful environment of economic development and trade in South Asia. US policy of the Afghan peace process is justified to certain elements if US looks over the China’s calm rise and will have strong defense relationships with India such by upgrading defense capability of India while Pakistan new era of economic stability will be in hot spot for human development and growth due to unequaled arsenal. The Biden Administration challenges are hard for client states. Where, Pakistan’s stance towards clientele was to focus on growing trade capabilities for peace in the region. But the repetitive diplomatic efforts of Biden administration are same as were Obama’s clientele relationship in which “Kerry Lugar Bill” didn’t democratize the so called “democratic diplomacy”. Unless and until, US sums up peaceful settlements in practice, the deal file remains on the table.

A responsible Withdrawal
As for the extreme will of resulting peaceful settlements, Pakistan promotes in success of Intra-Afghan talks which is a possible recipe to US “responsible withdrawal” for Global sustainable order and the political development in South Asia. Pakistan focuses on China Pakistan Economic Corridor which is the future of stability and Pakistan priorities it the most. As a result, Pakistan never underestimates the political crisis and civil war that may take place on its neighbor and unstable Afghan soil that shall be used to destabilize the projects of Pakistan. Instead, International influences have been subject to polarization and instability in the past events in War regions. A final responsible US withdrawal is the peaceful future of the region and global order.