How the oldest and the largest democracies handle Radicalization.

The seat of American Democracy, The US Capitol building, was stormed by Pro Trump MAGA rioters, some of them being armed, after they breached its walls during the ongoing house and senate sessions to confirm the election of Democratic President Elect Joe Biden. Some labelled it as the most dramatic challenge to the US democratic […] 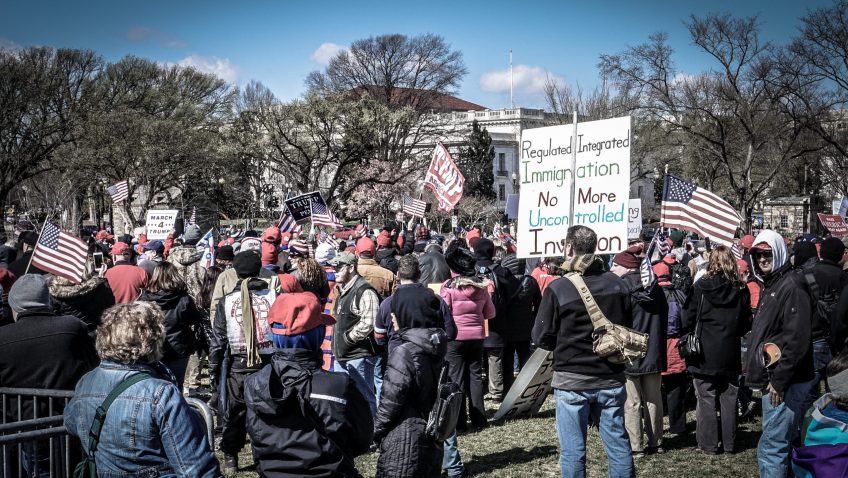 The seat of American Democracy, The US Capitol building, was stormed by Pro Trump MAGA rioters, some of them being armed, after they breached its walls during the ongoing house and senate sessions to confirm the election of Democratic President Elect Joe Biden. Some labelled it as the most dramatic challenge to the US democratic system since the civil war. As per The Guardian, Members of Congress were told to put on gas masks after teargas was fired in the Rotunda of the US Capitol forcing House and Senate members to scramble into safe spaces within secret locations in the building.

Many analysts have raised questions, citing the fact that had it been a group of Black Protesters, things would have taken a different turn and authorities would have dealt with them very differently. The way in which #BLM protests were crushed was not only horrible but also exposed the prevailing White Supremacist attitude within the American Mindset.
When we hear about this in Jammu and Kashmir, it doesn’t surprise us. We have had an experience with a phenomenon quite similar to this one, an idea of a Hindu Supremacy prevalent among the Ultra Right Political Parties and their affiliated Religious organisations in India.
Interestingly, the only people who enjoy the right to protest and an extra right to dictate, judge and punish apart from the Judiciary with complete impunity, are the people belonging to this Indianized Neo Nazi sub sect.
On 5th January 2020, the students in Jawaharlal Nehru University (JNU), a prestigious Delhi university that has long been associated with left-wing activism, were protesting against a fee hike when they were attacked by more than 50 armed masked men wielding sticks, iron rods, acid and stones. The goons belonging to ABVP, a right-wing student body linked to India’s governing Bharatiya Janata Party (BJP), indiscriminately assaulted the students and teachers causing serious injuries to more than 39 people.
To add insult to injury, the Vice Chancellor of the University M. Jagadish Kumar issued a statement the next day asking everyone concerned to forget about what happened, to move on and begin the process of online registration.
A story that appeared on The Wire read, “This reminds one of Prime Minister Narendra Modi wishing Kashmiris on Eid soon after the scrapping of Article 370 – a whiff of sadism that they feel will resonate with many Hindus.”
In the Aftermath of this Assault on Dissent, Many questioned the role of Delhi Police, that comes under the Ministry of Home Affairs headed by BJP leader Amit Shah, as Mute Spectators of Violence, while some blamed them for allegedly aiding the culprits.
A year has passed since, the Delhi Police has not arrested even a single person involved in the violent attack, despite many of them were identified. Instead it has registered an FIR against Aishe Ghosh, the JNU Students Union president, who suffered critical head and arm injuries during the attack.
Just an hour back, DC Police has said in a live update that they’ve made 52 arrests and more are underway. 4 violent Trump Supports have also been neutralized. Huge cache of Pipe Bombs both at the RNC and the DNC has been recovered along with Guns and Molotov Cocktails. Unlike the inefficient Delhi police that failed to do anything about the violent attack on JNU, DC Police is doing a slightly better Job.
During a Live Interview for YoungDiplomats , I told Mary Scully that America is a better Democracy than India and I still stand by words.  There are many problems within the American society but still, when it comes to civil liberties, you cannot imagine doing a lot of things, including questioning the authorities, without getting arrested, harassed, lynched or threatened.
Article by Mirza Jahanzeb Beg