What do you really know about the Syrian war ?

When did the conflict start ? 2010 2011 2012 2013 Correct! Wrong! The conflict started following a civil uprising. Indeed, on 15 March 2011, the protesters demanded democratic reforms and the release of political prisoners. When did Western countries formally recognize opposition as ” legitimate representative ” of Syrian people ? In March 2011 In […] 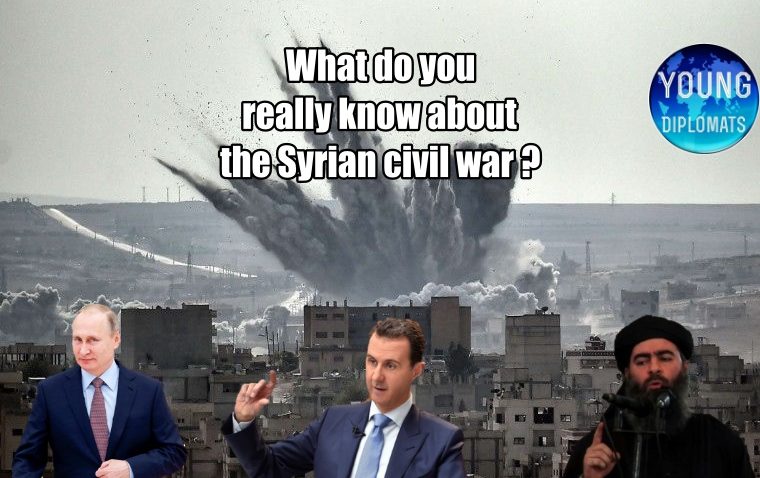 When did the conflict start ?

The conflict started following a civil uprising. Indeed, on 15 March 2011, the protesters demanded democratic reforms and the release of political prisoners.

When did Western countries formally recognize opposition as " legitimate representative " of Syrian people ?

The main allies of the Syrian government are...

Russia and Iran are the main allies of the Syrian government. Russia has a geopolitical interest which is the conservation of its military stronghold in Tartuz. Beyond that, the Russian government aims at protecting its traditional ally in the Middle-East (Syria and especially the Assad). Iran did a lot during the war through the Hezbollah. Tehran has moved its pieces in the game it's playing with Saudi Arabia. Then, Iran is also looking for a foreign establishment in order to develop its military abilities (it does so in the military compound of Al Qisweh in the south of Damas).

When did Syrian army dropped chemical bombs on the Syrian people ?

UN weapons inspectors conclude that chemical weapons were used in an attack on the Ghouta area of Damascus in August 2013 that killed about 300 people, but do not allocate responsibility. Government allows UN to destroy chemical weapons stocks, process complete by June 2014.

Did the U.S. act when the Syrian government cross this " red line " ?

When Barack Obama talked about a " red line " he'd suggested that the United States would wage big operations in Syria. However, hand-in-hand with Russia, the U.S decided to destroy the chemical arsenal of the Syrian government.

When did islamists become serious actors in the conflict ?

Islamist groups started to be tough players at the end of 2013. In early January 2014, serious clashes between the islamist groups and the " moderate ones " erupted in the north of the country. However, the proclamation of the islamic caliphate in June 2014 makes us think that 2014 is the year when islamists became serious actors. They were serious much earlier.

In which battle did Kurds show their military abilities ?

The battle of Kobane is important for Kurds. The YPG showed the whole world its military skills. The whole world watched Kurds fought to protect their territory during this battle in September of 2014.

When did Russia intervene in the conflict ?

Over the course of the war, how can you describe the U.S support to rebels ?

The trend you need to memorize is that the U.S support did decrease with time. the western coalition realized that the weapons they provided to rebels could go to islamist groups. Moreover the coalition also had to deal with its own interest and target its main enemy. At that time, Assad wasn't the priority but the Islamic state was. They decided to focus on the war against ISIS. For example in July 2017, Trump halted the CIA program which formed rebels.

Why did Turkey invade northern Syria by the beginning of 2018 ?

Erdogan didn't want Kurds have a stronghold in northern Syria for several reasons. Turkey has launched a war on the PKK and a Kurdish stronghold would be a shelter for the PKK fighters. Then, the Turkish government didn't want a proto Kurdish state on its border.

It is likely that rebels will lose the war. Factors are numerous. One can blame the lack of allies and how reluctant were the few allies they had. Absence of unity also played an important role in their defeat. Indeed, we are used to hear about the " opposition ". But it was far from being a unified side. It was split between islamist groups, Kurdish militias, the Free Syrian army and plenty of other groups.

How many people died since the beginning of the conflict, 7 years ago ?

Here are an estimation conducted by the Syrian Observatory For Human Rights : - 106,390 civilians, including 19,811 children and 12,513 women - 63,820 regime soldiers - 58,130 regime-allied and militia fighters (including 1,630 from Lebanon's Hezbollah and 7,686 from other foreign Shiite groups) - 63,360 hardline Islamists and jihadists (including from the Islamic State group and a former Al-Qaeda affiliate) - 62,039 fighters from other forces, including non-jihadist rebels, Kurdish forces and defected government soldiers these numbers are an estimation and goes more than 350,000.

Among these countries/nation, which one can be seen as the greatest winner of the Syrian civil war ?

Iran is, by far, the greatest winner of the Syrian civil war. It has strengthened its influence on the Syrian government by making him dependent from Hezbollah. Iran is about to establish several military complexes in order to develop its military capabilities. Tehran has shown its enemy (namely Saudi Arabia) that it could expand its influence and test new weapons on the Syrian soil. Russia is among the winners. The whole worlds realizes now that Russia is able to defend an ally and make a war with modern armaments. But these main gains of Russian aren't concrete, contrarily to the Iranian ones which are as concrete as persuasive. Kurds could have been the winner. But the recent assault of Turkey has ruined the opportunities of Kurds for being among the winners. Indeed, the Turkish army has conquered Afrin. By doing so, the territory Kurds got by fighting ISIS was cut in half. The U.S didn't win anything in Syria. Either Obama or Trump have greatly diminished the credibility of the U.S. during the Syrian conflict.

What do you really know about the Syrian war ?
Good job!
You are a wise observer of the Syrian civil war ! However, this bloodiest conflict is far from over ! Stay updated and follow YD quizzes !
Try again!
Don't worry you'll do better next time! YoungDiplomats will set up plenty of other quizzes ! Stay updated on the news !