In Mozambique, the Prospect of Natural Gas Will Guarantee Political Compromise

Analysis The balance of economic power in Mozambique has undergone a major change, rekindling dissatisfaction with the country’s entrenched ruling elite. The change means the East African country’s longtime ruling party will have to make political and economic concessions to central and northern Mozambique, areas where it has traditionally neglected to foster development. As part of […] 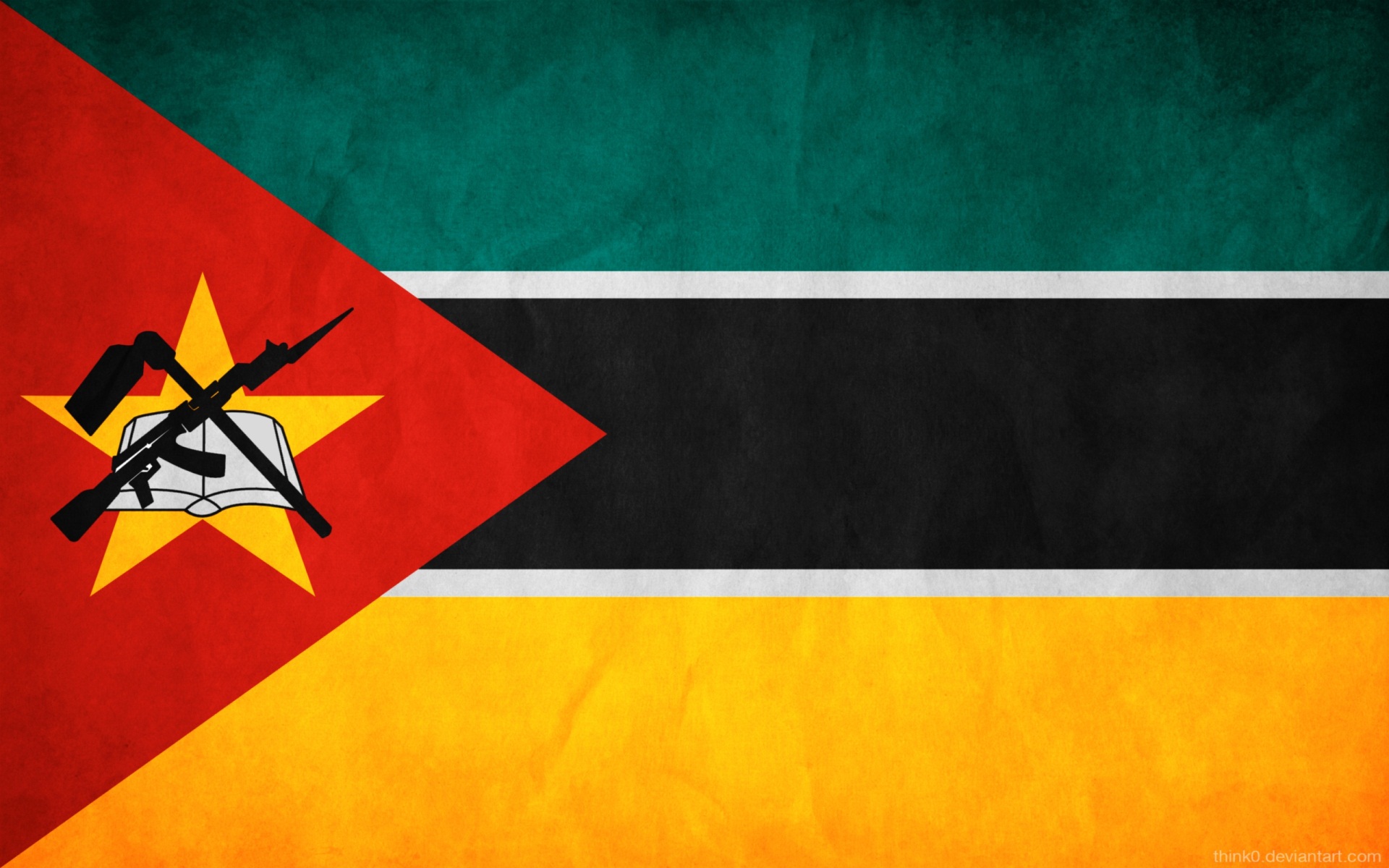 The balance of economic power in Mozambique has undergone a major change, rekindling dissatisfaction with the country’s entrenched ruling elite. The change means the East African country’s longtime ruling party will have to make political and economic concessions to central and northern Mozambique, areas where it has traditionally neglected to foster development. As part of the lengthy process, there will continue to be occasional violence between the ruling party, the Mozambican Liberation Front (Frelimo), and the main opposition, headed by the Mozambican National Resistance (Renamo). The conflict will be of the sort that has been ongoing — and intensifying in the past three months — since the disputed presidential election held Oct. 15, 2014.

Frelimo has governed Mozambique since independence in 1975. It fought a bloody civil war against the South African- and Western-backed Renamo until the 1992 Rome General Peace Accords. For most of the 1990s and 2000s, Frelimo focused on promoting economic development around the capital, Maputo, in far southern Mozambique. That region has long benefited from its proximity to South Africa’s relatively well-developed economy. Meanwhile, much of the central and northern parts of the country — the historical stronghold of Renamo and other opposition groups — was overlooked, both by Maputo and by the international community, which lost interest in Renamo after the end of the Cold War. Since the mid-2000s, however, international interest has grown in the traditionally poor region thanks to its natural gas and coal resources and suitability as a transport node for infrastructure linked to inland African countries.

The most significant of Mozambique’s potential new economic resources is its natural gas. Mozambique’s massive offshore natural gas reserves primarily lie in areas known as exploration blocks Area 1 and Area 4. Controlled by Anadarko and Eni, respectively, they could attract at least $31 billion in investment over the next five years. 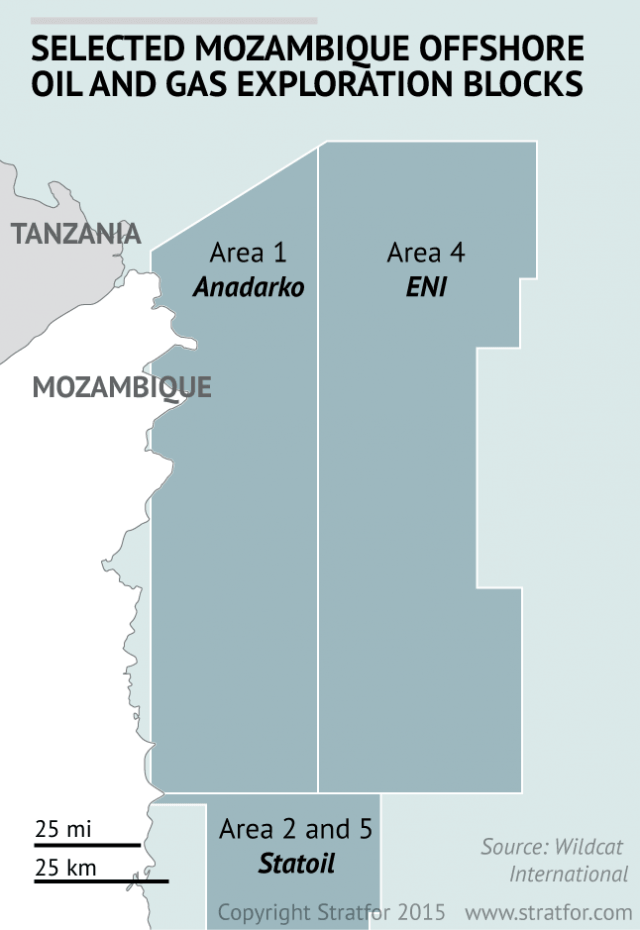 Discoveries in Area 1 alone have totaled 2.1 trillion cubic meters of recoverable natural gas. Standard Bank noted that a full development of Anadarko’s Area 1 resources would add $28 billion to Mozambique’s gross domestic product over the next two decades and that additional domestic natural gas sales from Area 1 could add another $11 billion, to say nothing of Eni’s Mozambican natural gas deposits or potential discoveries elsewhere in what has become one of the world’s most successful new deep-water natural gas plays. To put this into perspective, Mozambique’s GDP in 2014 stood at around $14 billion.

Mozambique’s natural gas could turn the country’s economy into one based on hydrocarbons, with an economic profile similar to that of Angola. Exactly when that could happen, however, is unclear. Global natural gas and liquefied natural gas prices are currently quite low. Moreover, a host of new supplies will go online in the next five years from the United States and Australia, potentially continuing the price decline in LNG markets. While Anadarko has signed deals with purchasers for two-thirds of its initial LNG export capacity, those agreements are not binding.

Like most market players, Anadarko has struggled to convert nonbinding agreements into long-term purchasing commitments needed to underwrite the development of its LNG project on its proposed timeline, which calls for first production in 2020. This means that Mozambique may need to wait until the market recovers before Anadarko, Eni and others can commit to financing and developing its natural gas deposits. The wait could delay Mozambique’s natural gas development deeper into the 2020s and perhaps postpone the full development of its fields for even longer. Delays aside, the development of Mozambique’s natural gas resources will eventually happen, though it will require Frelimo to pay more attention to the areas with natural gas.

And although Mozambique’s natural gas resources have the largest economic potential in the long run, other sectors have garnered significant interest over the past five years, too. Like most coastal southern African countries, Mozambique has sought to position itself as a logistical hub for interior nations. It has potential port development opportunities at Maputo, Beira and Nacala. The latter two are ideally situated as bases for routes into Zimbabwe and Malawi, respectively. Mozambique’s potentially giant government take from natural gas sales means it should be able to help finance infrastructure projects on its own, unlike its competitors.

Mozambican coal has proved less promising than natural gas and transport infrastructure. There has been a flurry of interest in Mozambique’s inland coal resources in the past decade. Rio Tinto, Vale and others have looked at Mozambique as a long-term coal development option, but low coal prices and high operating and development costs in Mozambique have so far largely held up any projects. In fact, Rio Tinto sold its Mozambican coal assets in October 2014 for $50 million, assets for which just three years earlier it had paid $3.7 billion. Interest in coal deposits did, however, lead to investment in rehabilitating Beira’s railway and the coal terminal at its port. Beira is one of the regions where Renamo enjoys the strongest support, and even though the coal projects turned out not to be economical, the newfound economic interest in the region has emboldened Renamo.

At the same time that the northern half of the country’s economic prospects have brightened, Renamo’s recognition of the legitimacy of Mozambique’s elections has waned. This trend intensified after incumbent President Armando Guebuza won 75 percent of the vote in 2009. Frelimo began undergoing an internal transition after Guebuza won a second and final five-year term in 2009. From independence in 1975 until 2014, Mozambique had just three presidents. All earned their party bona fides during the war of liberation from the Portuguese. Advancing age has forced this cadre to yield to a new generation, embodied by the current president, Filipe Nyusi.

The renewed economic activity outside of the Maputo region and Frelimo’s looming internal transition both contributed to Renamo’s abrogation of the 1992 peace agreement in October 2013. This marked a return to sporadic violence in the country’s middle region between October 2013 and a second peace deal in September 2014. In the second deal, Frelimo offered Renamo’s forces the chance to integrate into existing military structures, widespread amnesty for Renamo’s fighters and the chance for a greater devolution of financial resources beyond Frelimo’s inner circle.

But the 2014 peace deal did not last. After Nyusi won the presidency, Renamo and its leader, Afonso Dhlakama, quickly rejected the electoral results. In December 2014, they threatened to set up parallel governments in the northern and central provinces where they had won elections and to set up a secessionist Republic of Central and Northern Mozambique if their demands to annul the election were not met.

In February 2015, Nyusi eventually induced Dhlakama to come to the negotiating table. He also allowed Renamo to table a bill in parliament that would grant greater autonomy to the provinces it controlled. In May, however, parliament rejected the autonomy proposal on the grounds that it was unconstitutional.

Since then, Dhlakama and Renamo have tried to act on their promise to set up a parallel government, establishing a military headquarters and barracks. Violence approached levels not seen since the 1992 peace deal. Tensions reached a new high in September, when Dhlakama announced that Renamo would soon set up its own police and military. On Sept. 13, government troops attacked a convoy carrying Dhlakama in what Renamo called an assassination attempt. A month later, Maputo seized Dhlakama and placed him under house arrest; he has not appeared publicly since then.

Given the north and center’s economic empowerment and its own internal changes, Frelimo will have to strike some sort of political and economic compromise with the leaders from outside of Maputo if it wants to unlock the long-neglected region’s rich economic potential, especially since Renamo could stymie economic development in the north if it desired.

Frelimo can therefore be expected to placate northern and central stakeholders by distributing economic patronage. Though this could be done by allowing opposition parties a greater say in the national government, it could also be accomplished through the distribution of social spending through Frelimo’s local-level party apparatus. The latter is more likely than a broad deal with Renamo involving greater autonomy for the north and center or Frelimo relinquishing dominance at the national level.

But Frelimo will have only so much in the way of funds to distribute until natural gas deposits are developed, something that will take at least five years. Before then, the government itself will remain too cash-strapped to pay off Renamo to stop its low-level insurgency.

Since Renamo itself faces major financial limitations, its activities will remain too minor to scare off all development, much less to eject Frelimo from the region. Despite its claims, Renamo cannot directly threaten the Mozambican government, though it can carry out insurgent-style attacks on convoys, army barracks and physical infrastructure such as railways and highways. Its ability to threaten what will become Maputo’s economic lifeline — offshore natural gas — is extremely limited. And once these resources come online, their vast size will give whoever is in power in Maputo the ability to cement itself politically for an extended period.