Growing influence of US and China in the South China Sea

Introduction The US and China are great powers and when it comes to them, diplomatic relations are far from simple. When Trump came to power, he praised Xi Jinping and he was willing to have a good diplomatic tie with China. However, China has disappointed the US by not pressurizing Pyongyang to give up nuclear […] 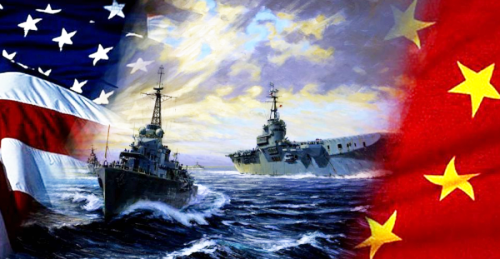 The US and China are great powers and when it comes to them, diplomatic relations are far from simple. When Trump came to power, he praised Xi Jinping and he was willing to have a good diplomatic tie with China. However, China has disappointed the US by not pressurizing Pyongyang to give up nuclear and missile programmes. This resulted in a trade war between these two major powers and reflects in the recent move in the South China Sea. Through economy, the US and China has launched a war.

The USS Stethem, a guided missile destroyer of the US entered within 12 nautical miles of Mischief Reef. It is the artificial reef in the Spratlys which was seized by China from the Philippines. Therefore, China accuses the US of this unauthorized entrance into its territorial water and defined it as a provocative action which violates China’s sovereignty. Therefore, it sent its battleships and fighter jets to warn the US and to protect its sovereignty. The US criticizes China for militarizing the region by constructing infrastructures such as naval docks, landing strips, airbases and radar communication systems. The Pentagon has already given a warning that China plans to construct floating nuclear power plants on disputed islands it created in this area.

The South China Sea and its importance

The South China Sea is the 3,500,000 square kilometers area of sea south to China and gives the countries fishing rights and opportunity for energy exploration. China, the Philippines, Indonesia, Malaysia, Taiwan, Brunei, Singapore, and Vietnam are sharing the South China Sea and they are not happy with China’s influence in this sea as they have disputes over the Spratly Islands, Parcel Islands, Pratas Island and the Scarborough Shoal.

Having the ongoing military presence in the South China Sea for decades, the US counters China’s ambition of ruling the sea. It made China deploy anti-ship missiles which can target within the range of about 300 nautical miles.

It is of strategic importance because one-third of the world shipping passes through this worlds second most used sea route that allows USD 3.4 trillion worth of world trade every year. China wants to bring this sea lane under control as part of its One Belt One Road initiative.

Also, China is interested in huge oil and gas reserves beneath the seabed. This sea is also important for the fisheries industry of China. More than these economic reasons, China’s ambition of becoming a strong maritime power in this region by controlling the sea and the other competitors in the region, plays a major role in China’s growing interest in the region. Thus, China claims 80 percent of the South China Sea and behaves more aggressively towards other countries in the region.

Though there is a conflict arising between the two economic giants in the world, there is less possibility of the outbreak of war as the main focus of these two countries is to upgrade their economies. YoungDiplomats has published a military comparison between the US and China and this is a must-read http://www.young-diplomats.com/china-and-the-us-who-would-win-military-comparison/