Forecast Thailand’s unpopular crown prince will succeed the country’s beloved but aging king, depsite speculation otherwise. An orderly succession process will reduce immediate political uncertainty in Thailand and support the ruling military junta’s near-term efforts to remake the country’s political system . As a weak monarch, the prince will depend greatly on the military for […] 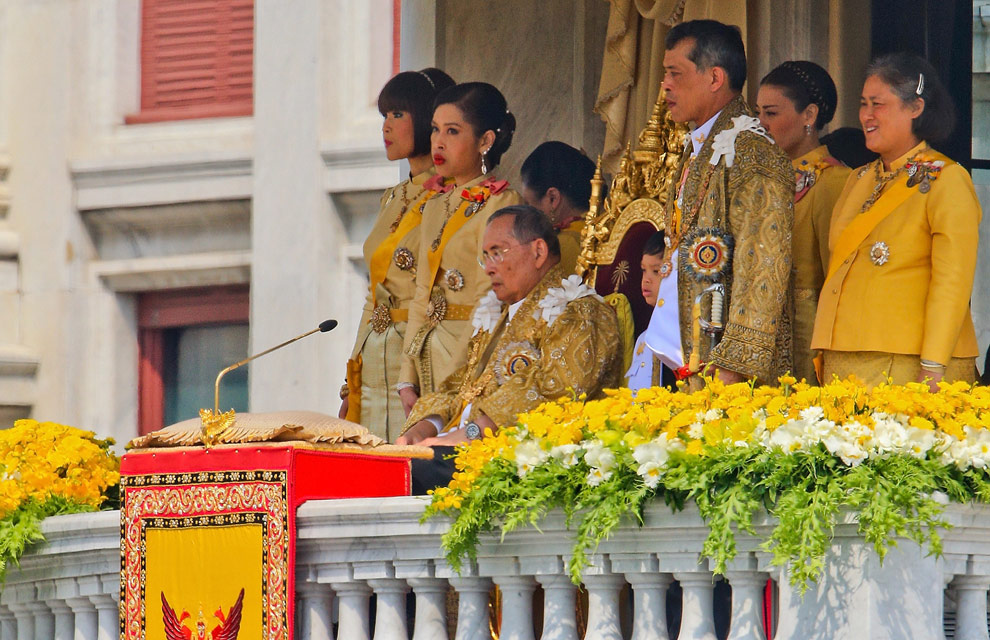 For more than a decade now, Thailand has been locked in an uneasy stasis regarding the future of its monarchy. Widely popular King Bhumibol Adulyadej, on the throne since 1946, has long been portrayed as a benevolent and stabilizing force — an informal supreme court of last resort capable of settling political disputes, punishing those who have overreached in pursuit of power, and restoring societal balance. This depiction credits the king with ensuring at least a superficial veneer of harmony in a fractious country that has seen nearly 20 attempted military coups since the end of the absolute monarchy in 1932. But the beloved king has spent the better part of the past decade in the hospital, fueling anxiety about how Thailand will cope in the absence of such a unifying figure.

Crown Prince Maha Vajiralongkorn, the king’s only male heir, lacks his father’s prestige and routinely has been embroiled in scandal. In a society that attaches celestial importance to the throne and largely views the monarchy as a force preserving Thai culture and values, the prince is thus seen as exceedingly unfit for kingship. Among Thai elites who have used the monarchy to preserve the existing societal order and to legitimize their preferred policies, the prince has become a threat to material interests as well. Such concerns have at times been exacerbated by the once apparent cozy relationship between the prince and self-exiled former Prime Minister Thaksin Shinawatra, whose ambition and consolidation of power before the military ousted him in 2006 — and whose repeated attempts to return to power ever since — make him viewed as a far greater threat to the existing order than the prince himself. Most alarming to the royalist elites has been, at least until recently, the possibility that the prince would pardon Thaksin and allow for his return.

As a result, for much of the past decade, powerful factions aligned against the prince were believed to be casting about for suitable alternative succession scenarios, such as having the more popular Princess Sirindhorn take the throne or having the queen act as regent until an heir from the next generation comes of age. The apparent struggle for the throne provided a behind-the-scenes context for the political unrest playing out in violent protests in Bangkok’s streets. Indeed, royalists used the monarchy to legitimize protests against Thaksin, while Thaksin used anti-monarchy rhetoric (implicit or otherwise) to signal his willingness to deprive the monarchy of its popular mandate. 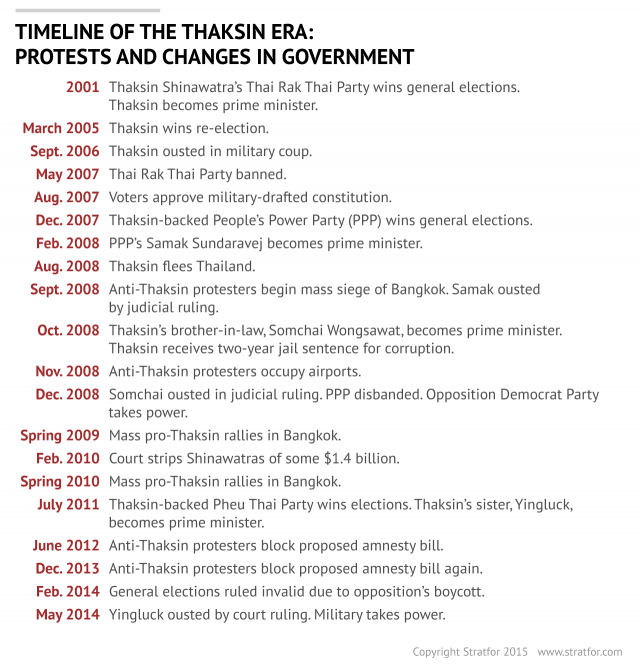 As various players positioned themselves to bend the succession process toward their own aims, fears grew that a disorderly handover would metastasize into a multi-sided power struggle that could shake Thailand to the core. This was one reason for the military’s 2014 coup that ousted Thaksin’s sister, Yingluck.

The royal succession — the first since the end of the absolute monarchy — will indeed be a singular and deeply unsettling event for Thailand. But at least the immediate risks of a chaotic changeover are fading. In fact, they were likely overstated in the first place.

Despite his unpopularity, the crown prince has always had factors working in his favor. First, the value of maintaining a real line of succession should not be underestimated. The monarchy is viewed as the embodiment of Thai character and, perhaps most important, as a bulwark against the corrosive forces of modernity that the Thai establishment claims Thaksin represents. To break with precedent — by, say, elevating Princess Sirindhorn, who is 60 years old and childless and thus will not further the line of succession — would weaken the royalists’ portrayal of the fight with Thaksin as an issue of traditional Thai values versus modern excess.

Second, the military’s firm grip on power since the 2014 coup has largely neutralized Thaksin and Yingluck and minimized their relevance to the succession equation. The junta has resolutely demonstrated its willingness to hold power — even if it means postponing elections indefinitely in the face of international and opposition pressure — until it feels satisfied that Thaksin has been sidelined for good. (For his part, Thaksin appears to be continuing to abide by a strategy of laying low until the military has little choice but to allow elections.) Meanwhile, Stratfor sources say that the escalating anti-monarchy rhetoric from Thaksin’s Red Shirt supporters during the 2008-2010 protests soured his relationship with the crown prince.

Uncoupled from Thaksin, the prince becomes palatable to most major stakeholders in the capital. In fact, the prince’s unpopularity is considered as much of an asset as a liability. As a weak monarch, the prince will be highly dependent on the military for legitimacy and will not command an independent power base sufficient to challenge the junta’s plans — or those of other pillars of power.

This dynamic highlights a key factor: the inherent limits on the monarchy’s influence. The current king built and maintained power largely by wielding it sparingly, neutrally and only in ways that support the image of royal infallibility. To do otherwise would risk open defiance and an erosion of influence (as may have occurred in 2008, when royalist Yellow Shirt protest leaders ignored the king’s behind-the-scenes urgings to end their siege of Bangkok’s airports). This is how the Thai monarchy thrived in an era when the influence of royal families around the globe waned or was abolished altogether. The new king will have even less latitude to maneuver independently and is unlikely to make a bold move, such as aligning with Thaksin, if such action risks exposing the monarchy as being wholly irrelevant.

As a result, according to Stratfor sources and media reports, the factions most opposed to the prince have largely been mollified. This reality was illustrated in a number of recent high-profile public events intended to forcefully signal that the crown prince is healthy, matured, and the undisputed choice to replace the king. To maintain the monarchy’s role in areas of society where it benefits them, the royalists will promote the King Bhumibol as a guiding light even after death, starting with a lengthy state-mandated mourning period marked by lavish public displays of reverence. Princess Sirindhorn, continuing her current role as the highly visible public face of the monarchy, will play a central role in preserving the crown’s image of magnanimity. Meanwhile, because the crown prince is 63 years old and believed to have chronic health issues of his own, the royalists will continue to groom and promote one of his sons as the eventual, more benevolent king to which Thais have become accustomed.

The Palace Is Only One Piece of the Power Struggle

Even if the succession process itself is orderly, Thailand is facing a longer-term problem: an erosion of royal prestige during a time of profound societal challenges and change. The monarchy has not always been revered and central to Thai affairs. As will the crown prince, King Bhumibol began his reign during a period of major political upheaval. He, too, was weak, shrouded in controversy related to the death of his brother, his predecessor on the throne, before taking advantage of a confluence of factors in the 1950s to begin slowly building up his power and prestige.

But the crown prince is highly unlikely to ever replicate his father’s path to esteem. During the Cold War years, the Thai establishment and military saw a strong monarchy as key to mitigating the threat of communism; now, the main players that will share Thailand’s peculiar balance of power with the next king have interests in his remaining on shaky ground. In the distant future, the moment may be right for a royal resurgence like King Bhumibol’s, but the next kingship will struggle to retain its influence.

This may prove highly disorienting for Thailand. Whatever the constraints on the current king’s wielding of influence, his deft touch from the throne has unquestionably helped preserve a delicate balance of political and business power among the monarchy, the military, and the political classes. Moreover, his occasional public interventions have helped prevent revolutionary impulses in Thailand from escalating to the degree seen in many of the country’s conflict-ridden neighbors. The crown prince will not be able to play a similar peacemaking role. The Thai military will attempt to fill the vacuum created by the monarchy’s erosion by pushing Thais to accept a politburo-style system, but the junta realizes it is fundamentally ill-suited to play a unifying role.

Eventually, as the mourning period fades, Thailand’s unsettled scores and underlying divisions will return to the fore. The military will have to prove that it is capable of navigating Thailand’s economic challenges and maintaining order without sparking a backlash to its heavy-handed tactics. Over the longer-term, a weakening monarchy will also bolster Thaksin in his self-styled position as Thailand’s modernizer — or, if not Thaksin himself, another populist figure capable of uniting Thailand’s rural masses. Bouts of violence between those trying to preserve the existing order and those willing to overturn it will return with time (often with vast sums of money at stake), and powerful business and political blocs will vie to reposition themselves in an off-balance system missing its core historical restraint.