Invited by the delegate of the Government of Catalonia, in France and in Switzerland, and by the General Secretary of the Diplomatic Council of Catalonia (DIPLOCAT), several members of Young Diplomats were able to discuss about the Catalan independence movement with Arthur Mas. Currently on tour in French-speaking Europe, the former President of the government […] 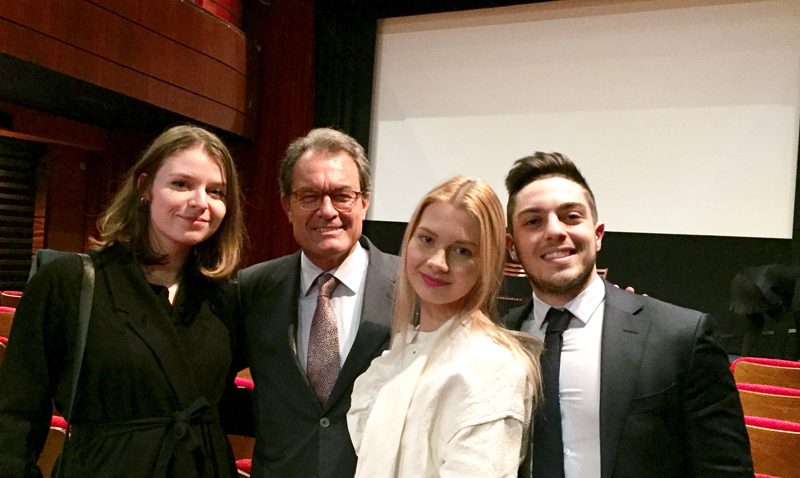 Invited by the delegate of the Government of Catalonia, in France and in Switzerland, and by the General Secretary of the Diplomatic Council of Catalonia (DIPLOCAT), several members of Young Diplomats were able to discuss about the Catalan independence movement with Arthur Mas. Currently on tour in French-speaking Europe, the former President of the government of Catalonia presented Alexandre Chartrand’s documentary called “Le peuple interdit” (the forbidden people), a striking and evocative title, which highlights the political process in Catalonia.

Mr Mas, what is the goal of your European tour?

My real goal is that the political and democratic process of Catalonia can come to a good point. Then, to have a referendum this year, which the Catalan government is going to organize, probably in September. The referendum is a democratic fact. Indeed, 80% of the Catalan population want the referendum. Even the people who are against Catalonian independence underline the democratic right to a referendum. Thus, it’s my aim to help the Catalan government achieve its goal. In Catalonia, we are like Quebec and Scotland. The government of Quebec has organised two referendums; in 1980 and in 1995, and Scotland organized one in September 2014. We have the right to decide to intervene, but we want to do it through negotiation, with a political dialogue with the Spanish state and the European authorities. There will be a referendum, but we will have to see under what conditions this referendum can be carried out. The refusal of the Spanish government is very hard; I was sentenced to a 2-year public service ban because I listened to the Catalan population and organized a non-legally-binding consultation. The Spanish state is very hard; it is not the United Kingdom or Canada but I am determined that the referendum will happen. So, I hope and expect that the Catalan population react, as always, in a peaceful, democratic way by participating in a referendum.

In terms of Madrid, which does not want to hear about the referendum, what do you think the Spanish authorities will do?

I am sure that the Spanish government is going to make a political issue a legal issue. They will try to condemn by criminal means the Catalan political leaders who are in favour of the referendum and independence. They are also organizing campaigns that question the credibility of the Catalan leaders. But I do not know if they will do anything more. They might try to suspend Catalan autonomy. This is a very serious thing but I do not know how far they think they will go.

And what about the relationship with the European Union?

In general, European countries and states react in an understanding manner regarding the democratic approach of the Catalan people. They saw the enormous demonstrations that took place in Barcelona. They also see that there is a Catalan Parliament with an absolute majority of seats for independence, another democratic fact. They know that we have an attitude of negotiation and dialogue. They do not understand why the Spanish government isn’t doing anything in terms of political dialogue to find a solution, which I believe to be possible. But at the same time, they consider that the independence of a territory like Catalonia is a problem added to a lot of problems on the table.

What is the economic implication of this process? Is it the key issue?

Economic issues are important but they are not the main cause of the desire for independence. There are economic problems for Catalonia as for the world, but above all there is the aspiration for the majority of Catalans to be able to develop a project for the future, which could be good for the whole Catalan population. We had always thought that it was shareable with Spain, that we could do it together. Nevertheless, we have concluded that in order to be a successful country like Denmark, Austria, or Belgium, a small but very successful country, we must have our own tool. Then there are economic, cultural, identity, linguistic questions, but also questions about the right to decide and above all the ability to make our own decisions. There are questions of international projections, to have a voice, modest but our own, in the World and in Europe. But above all, there is the aspiration to build a project for the future. Finally, if the “yes” wins, we will have to open a process of negotiation with the international actors to implement the result.

Shanna Leduc Morin
Shanna is an HEIP student in Paris. She has conducted several interview for Young Diplomats and is in charge of recruiting and managing a team of collaborators throughout Western Europe.