Afghans Leaders : The War for Leadership

The Afghan national unity government between President Ashraf Ghani and Chief Executive Abdullah Abdullah will fail to implement electoral reforms, thereby delaying parliamentary elections scheduled for October. Disagreements over Pakistan’s plans to build a fence along the Durand Line will weaken ties between Islamabad and Kabul in the near term. NATO will pledge to invest […] 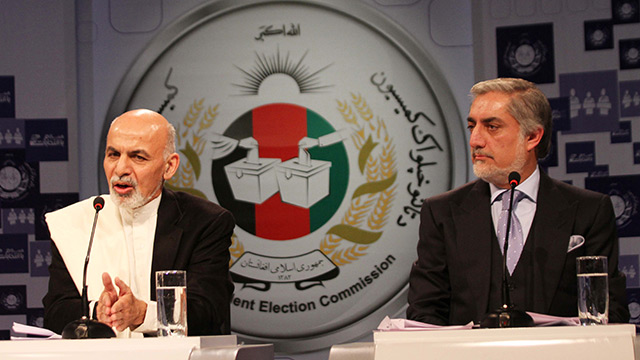 For much of Afghanistan’s history, its combination of competing ethnic groups, illogical boundaries and impotent central government have weakened its status as both a nation and a state. Today, these problems persist, and Afghanistan finds itself burdened with four interrelated challenges: a political system unable to advance reform, a military unable to monopolize the use of force, an anemic economy overreliant on foreign aid, and a perennially strained relationship with neighboring Pakistan.
Without a concerted effort to address these issues, Afghanistan will be unable to quash the Taliban insurgency and achieve political and economic stability. Consequently, the current government, led by President Ashraf Ghani and Chief Executive Abdullah Abdullah, will not fulfill one of the key requirements of its assumption of power — implementing the electoral reforms necessary to hold parliamentary and district council elections.
Of course, the Afghan government will still have help from abroad: NATO will renew its annual commitment to support the Afghan National Army through 2020. But ultimately, Afghanistan’s challenges have roots in its geopolitical fault lines, and the security alliance can, at best, help only to manage the country’s problems instead of solving them.

Afghanistan is home to several ethnic groups that have historically been hostile toward one another, and their people are not always bounded by borders. For instance, Afghanistan’s largest and most dominant ethnic group, the Pashtun, constitutes 42 percent of its population, with many of them living in neighboring areas of Pakistan. The 2,200-kilometer (1,370-mile) Durand Line, drawn in 1893 to demarcate the Afghanistan-Pakistan border, was meant to divide the fiercely autonomous Pashtun and define the western edge of the British Empire.

Predictably, the Durand Line has been contentious. After the creation of Pakistan, Afghanistan rejected the line, claiming that it should be pushed southeast to absorb Pakistan’s Federally Administered Tribal Areas and the Khyber-Pakhtunkhwa province, both dominated by the Pashtun. In the 1970s, Afghan President Mohammad Daud Khan challenged the legitimacy of the porous Afghanistan-Pakistan boundary by resurrecting the idea of uniting the Pashtun nation into a single territory, preferably in Afghanistan. More recently, Pakistan has pushed to build a fence along the Durand Line to cut off militant attackers crossing from Afghanistan. The plan met resistance from Afghans who think a fence would legitimize a border they still contest. Pakistan’s new plan to build checkpoints will likely further strain ties between the countries in the near future, compounding the difficulties of negotiating an end to the 14-year war in Afghanistan.

Afghanistan’s rulers have long practiced a policy of internal colonialism, whereby the majority-Pashtun rulers suppress members of other minority ethnic groups to sustain power. Even the Taliban, though they are waging an ideological war, are also in some sense promoting a parallel Pashtun nationalist movement, as almost all of their fighters hail from that ethnic group. This has exacerbated mistrust between the Pashtun and the country’s other major ethnic groups. These include the Tajiks, who make up a quarter of the Afghan population and whose ethnic grouping straddles the Afghanistan-Tajikistan border; the Hazaras, who make up 10 percent of the population; and the Uzbeks, who also constitute about 10 percent of the population and whose ancestry can be traced to neighboring Uzbekistan. In one instance of pent-up ethnic tensions coming to a head, tens of thousands of Hazaras took to the the streets in Kabul on May 16 after the government altered the proposed route of a major electricity transmission corridor away from Bamiyan province, a Hazara stronghold.

The State, Violence and Politics

In Afghanistan, the country’s tenuous boundaries and diverse, divided population have made the central government weak. Outside powers drew all the nation’s borders, which do not correspond with geographic or ethnic boundaries. Moreover, the various tribes and ethnic groups living in its mountainous terrain have a deeply ingrained sense of autonomy. As a result, the Afghan government struggles to project its authority and faces challenges — most prominently from the Taliban — in its attempts to enforce laws and ward off internal and external threats.

Afghanistan’s disunity is embodied in the current political arrangement between Ghani, a Pashtun, and Abdullah, an ethnic Tajik. The two competed in the April 2014 election and a June 2014 runoff, but widespread allegations of fraud prompted the Afghan Independent Election Commission to conduct an audit of the 8 million votes cast. When the commission declared Ghani the winner in September 2014, U.S. Secretary of State John Kerry helped broker a national unity government with an agreement giving Abdullah a role in governance. By presidential decree, Ghani created the post of chief executive for Abdullah, granting him shared powers in selecting Cabinet members and chairing ministerial meetings.

Now, Abdullah is set to step into an even more prominent position. Under the unity agreement, the country will convene a grand assembly of elders in September to propose a constitutional amendment creating the post of prime minister, formalizing Abdullah’s role and expanding his power. Of course, ethnic politics are at play: The Tajik, recognizing that the more numerous Pashtun will always dominate presidential elections, want to create a check on the president’s powers by creating the post of prime minister, to be elected by parliament. As for Ghani, he is willing to accept the amendment — though it will inevitably curb his power — so long as it keeps his administration alive.

A number of political developments are making Ghani feel vulnerable. During a visit to Afghanistan on April 9, Kerry announced that the unity government’s tenure should extend to five years instead of two, as originally envisioned. Apparently, Washington’s confidence in the electoral reform process is waning, and those elections will likely be delayed. Adding to Ghani’s woes, the lower house of parliament during the week of June 13 unanimously rejected his proposal to hold the parliamentary and district council elections scheduled for Oct. 15.

Reforms required to hold those elections — including redrawing the boundaries of the country’s 407 districts — are necessary to avoid repeating the pitfalls of the 2014 elections. But there has been considerable resistance to reforms in parliament because redistricting would likely divide ethnic groups. Meanwhile, political rivals are pointing to the lack of reforms and questioning the legitimacy of the unity government. The term of the Afghan lower parliament had expired in June 2015, but the lack of electoral reforms prompted Ghani to extend its tenure by presidential decree.

The Perils of Foreign Dependence

According to a report released by the special inspector general for Afghanistan reconstruction, the United States since 2001 has invested $113 billion in development funding in Afghanistan. Although the country has made gains in expanding education and health care, endemic corruption sustained through entrenched patronage networks has meant that much of the aid has been squandered. Yet an even deeper problem exists. A consistent pipeline of foreign aid means that Kabul does not have a strong incentive to expand its tax base, which in a democracy helps form the social contract between the rulers and the ruled. Taxpayers can demand that the government meet their needs and vote their leaders out of office if the government is unresponsive. Since only 37 percent of Afghan government expenditures is covered by tax revenue, the country will continue to rely on foreign aid to bridge the gap for years to come.

Moreover, security is a prerequisite to development. If Afghanistan is to avoid slipping into the same violently fractious political landscape that gave rise to the Taliban, it will need money to bolster the Afghan National Army, which continues to struggle with defections and poor leadership. Afghanistan’s gross domestic product growth will slow this year to 1.9 percent. Adding to the country’s insecurity is the illicit opium trade. Despite a concerted effort to eradicate opium growing, in 2014 the Afghan black market sold $2.7 billion worth of the crop, making it the country’s largest export.

The deteriorating security situation in Afghanistan pushed 180,000 Afghans to migrate to Europe in 2015 — only Syria had more migrants flee to Europe. The demographic pressure on Europe from the Afghan migration adds another incentive for NATO to continue its mission to train and advise the Afghan National Army. To fulfill that aim, NATO, which announced June 15 that it will maintain its six bases in the country through at least next year, is likely to renew a $5 billion annual investment in Afghanistan through 2020 during its Warsaw Summit in July.

The problems facing Afghanistan are deep and varied: a divided ethnic landscape, weak political institutions and a faltering economy requiring a constant stream of foreign aid. So long as the Afghan polity does not work to address these challenges in a sustained and meaningful way, the plight of Afghanistan will long overshadow its promise.