The Egyptian government failed to generate strong voter turnout for the first phase of its multi-step parliamentary elections ending Oct. 19. The government has delayed the election multiple times since the country’s last legislature was dissolved following the July 2013 military coup, citing at times logistical difficulties, security concerns or most recently difficulties drafting a fiercely debated electoral law. Voter turnout — which domestic media and government officials have put anywhere from 12 to 17 percent — fell far short of the over 60 percent that came out in May 2014 to elect incumbent President Abdel Fattah al-Sisi.

Al-Sisi’s government had been counting on strong turnout to legitimize the future legislature, empowering it to push through a series of significant economic reforms. If so few voters turn out for future stages of the election and public sentiment begins to turn against the still largely popular al-Sisi, dissent may delay political and economic reform initiatives, possibly defeating Cairo’s attempts to make itself less dependent on financial aid from Gulf states.

As voters prepare to select their representatives, Egypt’s military-backed government is embroiled in political conflict with Islamist groups. It has been nearly four years since parliamentary elections in 2011 catapulted the Muslim Brotherhood’s Freedom and Justice Party into the political spotlight. This time, the Islamist party is banned from participating in elections. The president’s administration has conducted a far-reaching crackdown against the Freedom and Justice Party while simultaneously combating a rising insurgency along the Nile Valley and an entrenched Islamic State-affiliated militant presence in the Sinai Peninsula. In the face of such security threats, the Egyptian government needs a legislative body that can insulate the president from upcoming difficulties. But it must also be able to make necessary decisions regarding reform, security operations and the country’s political and economic profile. The economic aspect is especially important because Egypt is trying to meet the demands of financial institutions such as the International Monetary Fund and strategic backers such as the United States.

Islamist political forces, however, are not al-Sisi’s only concern. The years since the initial 2011 uprising against President Hosni Mubarak have not been easy for many Egyptians. Partially to blame for the general public’s current apathy and election fatigue is the fact that ordinary Egyptians have little confidence a future legislature will faithfully represent the public interest. Any parliament, they believe, will likely support the administration and its military backers. Many civil society groups and nongovernmental organizations fear that a parliament made up of former military and security figures, businessmen and pro-government forces will not be able to exercise sufficient oversight of the al-Sisi government. 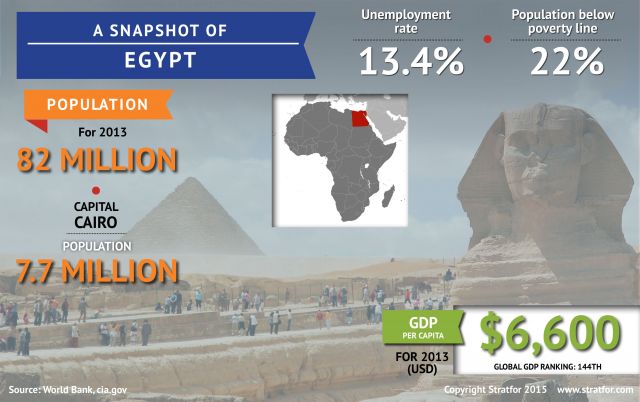 The Need for Reform

Despite low voter turnout, the elections are significant in that the future legislature will have the ability to amend the constitution. Parliament has, among other powers, the ability to approve or dismiss the president’s selection for prime minister, withdraw confidence from the Cabinet and even impeach the president. It can also retroactively review the nearly 300 laws al-Sisi and his Cabinet have approved since the old legislature was dissolved in 2013. But a relatively pro-government legislature may refrain from exercising those prerogatives. Indeed, this is precisely the kind of parliament the al-Sisi government is hoping for: one that will willingly vote to reduce its own powers and largely lend support to government initiatives.

While trying to keep the legislature in check, al-Sisi will be watching carefully for dissent among his own supporters. The president’s struggling anti-insurgency campaign, Libya’s instability and Egypt’s tense relationship with the United States have all sown dissatisfaction and dissent in certain factions among the ruling elite. Similarly, Egypt’s lavish pension schemes — which are partially responsible for its vast military and the cohesiveness of its state bureaucracy — are becoming too expensive. The country’s industrialist class and the economic elite are competing for the state’s finite resources.

While the government is projecting the image of a stable and united administration, al-Sisi’s popularity is not absolute. Members of the military or security apparatus were allegedly behind the release earlier this year of several embarrassing recordings of the president speaking about international leaders, including the royal families of the Persian Gulf. The president is keen to drum up public support for the election, if only to push back against simmering opposition to his authority.

Egypt’s economic constraints will make it especially difficult for Cairo to follow its imperative of lessening financial and energy aid from outside powers, mainly long-term rivals in the Persian Gulf — the Gulf Cooperation Council. Following the onset of its own political and economic instability, Egypt has accepted GCC deposits, grants and oil shipments to manage its deficit spending. But in return for relieving Egypt’s economic stress, Gulf leaders such as Saudi Arabia expect Cairo to fall in line with their foreign policy priorities, such as committing forces to the fight in Yemen and providing support for Sunni rebels in Syria. But Egypt has little interest in Yemen. It would much rather redirect the GCC’s focus to Libya, where many of its own security problems originate. Moreover, Egypt has no tolerance for political Islamists such as the Muslim Brotherhood and is strongly opposed to facilitating a rebellion that has the potential to put Islamists in power in Damascus. The al-Sisi government has come out quite publicly endorsing Russia’s military reinforcement of the loyalists in Syria.

Until now, al-Sisi and his Cabinet have enjoyed relatively direct rule without legislative oversight, and upcoming elections are not likely to introduce much change. Based on Egyptian opinion polls and apathetic public sentiment, the new legislature will lack strong opposition groups that can check the president’s power. For now, al-Sisi’s direct control over policy will remain largely intact.

However, the more pressing challenge for the president will come not from the new parliament, but from among the political elite. Tensions within the ruling establishment may delay policies or exacerbate existing dissatisfaction among the general public. And as long as opposition constrains al-Sisi’s ability to enact much-needed structural reforms, the president will find it more difficult to restore Egypt’s economic independence and thereby reduce Egyptian dependence on the GCC for aid.