Israel/Palestine : Is this the beginning of another Intifada?

For the first time in a decade, the idea of generalised strikes, riots, protests, and violence escalating to “intifada” proportions looks entirely plausible. Escalation by Israel, and Hamas in Gaza, looks likely. Israel, especially Jerusalem, has experienced a steady string of small-scale attacks since the war in Gaza last summer. Attacks have intensified in the […] 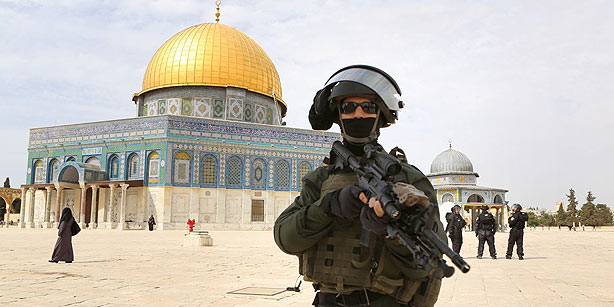 For the first time in a decade, the idea of generalised strikes, riots, protests, and violence escalating to “intifada” proportions looks entirely plausible. Escalation by Israel, and Hamas in Gaza, looks likely.

Israel, especially Jerusalem, has experienced a steady string of small-scale attacks since the war in Gaza last summer.

Attacks have intensified in the past month. On Sunday alone, the Israeli Air Force carried out overnight strikes in Gaza and there were violent clashes near Nablus, Tulkarm, and in the Abu Dis area of Jerusalem.

At the same time, increasing numbers of protestors gathered in Gaza near the border with Israel and a general strike was declared in the Palestinian territories for Tuesday.

Perhaps most worryingly, a Palestinian woman and an Israeli police officer were wounded in the West Bank near Jerusalem when she detonated a gas canister in her car in what would have been the first suicide bombing in Israel since 2008.

Is this the beginning of another intifada?

The current violence is already nearly intense enough to be considered an intifada if it continued, and further escalation seems likely.

In an interview before last summer’s Gaza war, a former Israeli security official told me that a Third Intifada was unlikely because Palestinians know that violence “is not good for them” and would grant Israel “legitimacy for using military force”.

Ayed Atmawi, a Palestinian political activist and employee of the Geneva Initiative in Ramallah says Palestinians “know the only one to benefit from a military confrontation and chaos is Bibi [Israeli Prime Minister Benjamin Netanyahu]”.

He says Palestinian President Abbas is aware of this and is always keen to avoid deaths on both sides.

Nevertheless, Palestinians are frustrated with the lack of movement on the Oslo Accords and angered by continued construction in Israeli settlements in the West Bank.

Mr Abbas cannot control every individual and the clashes between Palestinians and Israeli security forces show it is impossible to rule out further escalation—including to proportions one might label as an “intifada”.

The reason escalation is likely to continue is today’s attacks appear to be mostly uncoordinated and thus difficult to counter without force.

What can Israel do?

It is possible that significant concessions by Israel might reduce the violence, but even that is not certain.

Mr Netanyahu’s government was elected not to make concessions to Palestinians and doing so would likely destroy his coalition.

Furthermore, hardliners in the Israeli government will be concerned that concessions given at a time of violence would serve to reward that violence.

Avoiding such concessions is therefore a longstanding Israeli policy. If concessions are impossible, the only other option is a heavy Israeli crackdown on Palestinian violence.

What can the Palestinians do?

If Mr Abbas continued to cooperate with Israeli security, his legitimacy in Palestinian eyes would be severely damaged, potentially stoking violence.

If he did not, violence would also rise. Either decision would thus likely lead Israel to harsher measures.

A final piece of the puzzle is Hamas in Gaza, which continues to reject Israel’s very right to exist.

Israel has been hitting Hamas sites there in response to rocket launches by other groups from the Strip, hoping to encourage Hamas to crack down on them.

Hamas’s situation in Gaza is precarious, but this is not necessarily a bonus for Israel.

Opinion polls have shown that Gazans disapprove of Hamas whenever it appears to be idle while others are making moves against Israel.

If internal pressures on Hamas rise, it is likely to allow other militant groups to launch rockets at Israel rather than stopping them.

Israel would respond by increasing attacks on Gaza. Such a situation could easily escalate into another war—the fourth in just 8 years.

The status quo between Israelis and Palestinians looks increasingly untenable.

Whether that means an intifada will depend not only on decisions taken by the Israeli and Palestinian governments, but also those taken by Hamas and individuals on the Palestinian street.

Charles Kirchofer is a PhD Candidate in the Department of War Studies, King’s College London