A general view from the presidential palace in Astana, Kazakhstan. (POOL/AFP/Getty Images) Forecast Low energy prices, flat energy production, a volatile currency and demands from the Kazakh people will hurt the Kazakh economy next year as bankruptcies rise among firms. To counter this poor economic outlook, the Kazakh government will begin its most ambitious privatization […]

A general view from the presidential palace in Astana, Kazakhstan. (POOL/AFP/Getty Images)

Since 2000, Kazakhstan has greatly benefited from and has come to depend on its energy wealth. The country’s energy resources have created a robust economy, with GDP growth averaging 8.4 percent over more than a decade, and provided the government with more than half its revenue. However, the downsides of that dependence became abundantly clear for Astana, as it did for many governments that relied on oil exports, when oil prices plummeted in 2014, leading to a subsequent 4.3 percent decline in Kazakhstan’s GDP. The Central Asian country did not fare better in 2015. The Kazakh government, which had originally forecast a GDP growth of 1.5 percent, revised it downward to 1 percent after the first 10 months of the year. That figure may decrease yet again by the end of the year.

In an attempt to ameliorate its poor economic situation, Astana will promote an enormous privatization program for many Kazakh state firms to rally foreign investment in 2016. But this will not ensure economic stability; in fact, it has not worked in the past. Reticent foreign investors, self-interested business elites, a history of protectionism and a volatile investment environment will all be barriers to the government’s plans to help its struggling economy, creating further economic uncertainty and potentially causing more damaging social unrest in a country already grappling with an unstable Central Asian region.

Along with falling oil prices, Kazakh energy production flattened and the nearby Russian economy went into recession, itself the result of dependence on oil exports as well as Moscow’s standoff with the West and its subsequent economic sanctions. Kazakhstan’s industrial sector then contracted by 2.2 percent for the year, and the declining energy sector wracked up a $4 billion budget deficit for the Kazakh government in the first nine months of 2015, compared with a $6 billion surplus in the same period in 2014. The government had already slashed its 2015 budget by 10 percent in February. The revision in spending was accompanied by the re-pegging of the state budget at $50 per barrel of oil, down from the initial $80 per barrel. The government also revised its ambitious plan to raise oil production every year by 3-6 percent to reach 2 million barrels per day by 2019 — a plan initially set for 2015. Meanwhile, some elements of the Kazakh government are forecasting flat oil production through the next four years. 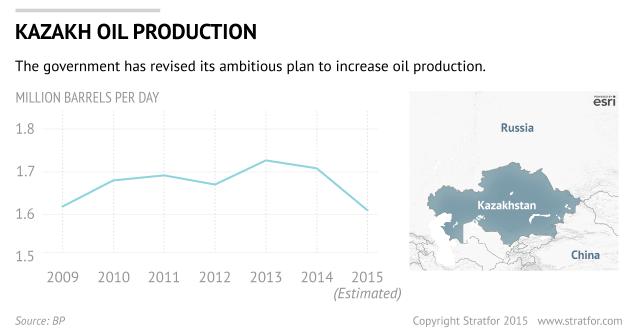 Astana intended to counter its current economic hardships with increased foreign investment. In April, Kazakh President Nursultan Nazarbayev brought back former Prime Minister Karim Massimov, a pro-investment leader with friendly business relations in the east, Russia and the West, for this very purpose. Massimov launched an “Invest in Kazakhstan” program, lobbying parties around the world. However, there has been little return for the premier’s efforts. In fact, foreign direct investment has fallen by half from 2014 to 2015, according to initial estimates by the National Bank of Kazakhstan.

An additional problem this year was the government’s initial refusal to devalue its currency, the tenge, alongside the depreciating Russian ruble. Because Russia is one of Kazakhstan’s primary export destinations, the falling value of the ruble made those exports too expensive for Kazakh industry. Combined with the low value of Kazakh oil exports, the country’s cumulative export values fell by nearly half in the first nine months of 2015, dropping from $62.7 billion to $36.4 billion. Kazakhstan’s trade turnover with the members of the Eurasia Union (Russia, Belarus, Armenia and Kyrgyzstan) also fell by 26 percent in the first three quarters of the year. After spending $28 billion to defend the tenge over the course of 18 months, the Kazakh government finally unpegged the tenge from the U.S. dollar, allowing a sharp 40 percent devaluation in August. Unfortunately, slowing industry and exports had already set in, plunging the economy into the volatile predicament it now suffers and will continue to confront in 2016.

To assuage potential economic damage and the social instability that may come with it, the Kazakh government approved a fairly stringent 2016 budget on Nov. 25, based on an oil price of $40 a barrel — a more conservative estimate than Russia’s federal budget. The government is projecting GDP growth of 2.1 percent but also a volatile and weak tenge because of low oil prices, its interconnectedness with the Russian ruble, and the government’s hesitancy to continue defending the currency.

Concerns that inflation in Kazakhstan will continue to rise in 2016 are growing as well. The government has set a target of 6-8 percent inflation for the coming year, but it surpassed 9.4 percent in 2015. The central bank’s policies and an uncertain economic outlook could lead to increased bankruptcies, according to Stratfor sources. Corporate bankruptcies — something the government has kept quiet — doubled this year, totaling 320 bankrupt companies. Should bankruptcies continue to rise, discontent among the business class, as well as those it employs, could increase, a worrying issue for the government.

Already, many Kazakh firms are trying to either shed bad assets or downsize. State energy firm KazMunaiGas will consolidate its 206 subsidiaries down to 75 companies over the next few years, privatizing at least 51 percent of its oil refineries, natural gas station network and international assets. The company has received $4.7 billion from the government for shares in its Kashagan energy project as well to avoid defaulting on its debts. Also notable, Kazakhstan’s largest sovereign wealth fund, Samruk-Kazyna, announced in early November that it would close down its foreign subsidiaries in early 2016, leaving offices open in only Moscow, London and Beijing. Samruk-Kazyna reportedly has connections to 80 percent of Kazakh firms and financial assets, and the effects of the downsize will ripple throughout the rest of the country’s businesses.

Kazakhstan’s powerful business class has forced the government to choose some socially unpopular policies for the coming year, too. On Nov. 23, the Kazakh government adopted new labor codes that were contested by labor unions across the country — particularly in the energy sector. The new codes will allow firms to reduce the number of workers or their salaries more easily. Unemployment in the energy sector has already risen by 31 percent, and the salaries of most of those still employed have decreased by approximately half. The labor unions in the energy sector have said that if the government does not revise its policies in 2016 they will strike. The government has started to crack down on and detain the leaders and organizers of the unions to disrupt their plans; such protests and crackdowns can quickly get out of hand, as seen in the 2011 Zhanaozen riots. Rising extremism in the region stemming from the conflict in Afghanistan could likewise inflate social instability should the economy continue to suffer.

To retain economic stability, gain cash for businesses and relieve pressure on the government’s coffers next year, the Kazakh government is planning to launch its most ambitious privatization plan since the country’s independence from the Soviet Union. The government plans to cut state ownership in 60 of the country’s largest firms and thousands of smaller companies and assets, many with stakes held by the government through Samruk-Kazyna.

The scheme envisions auctioning off the small companies to the highest bidder, but the large strategic firms will sell an equity stake to particular foreign investors before an initial public offering listing in Astana. Shares or stakes are reportedly up for grabs in energy firm KazMunaiGas, Kazakhtelecom, railway company Kazakhstan Temir Zholy, nuclear holding company Kazatomprom, Samruk Energy, mining companies Eurasian Resources Group and Kazzinc, Air Astana, Astana International Airport and Aktau Port. The Kazakh government allegedly circulated a list of 60 companies among foreign investors this fall, including during Nazarbayev’s visits to London, Paris and Doha. The list was meant to test investors’ reactions and is not finalized, according to a Stratfor source.

Of course, the Kazakh government has attempted privatization schemes before with no success. In 2013, the government launched a program called the “People’s IPO,” which would have auctioned off shares in 10 of the largest firms to Kazakh citizens. The government’s goal was to raise cash for the firms while tying the Kazakh people into the major government enterprises. But the first two IPOs were opened without any real interest from the Kazakh people, who lacked the financial capability to take advantage of the scheme. Eventually, the rest of the program was scrapped.

Moreover, if Massimov’s attempts to appeal to foreign investors are any indication, the latest privatization program could also see wariness from foreign investors. The Kazakh government is continually changing investment laws, having amended them five times in 2011, 39 times in 2012 and 270 times between 2014 and 2015, making the investment climate highly uncertain. Kazakhstan hopes investors will look more positively on the country after it joins the World Trade Organization in mid-December, but Astana has applied to the WTO for exemptions in several categories that involve how foreign firms operate in the country. Such fluctuating policies will only reinforce foreign investors’ reticence.

Another issue for investors is the debt big state firms carry because of social obligations dictated by the state and the government’s oversight over any possible restructurings. Stratfor sources are worried that the government will not be able to organize the country’s stock exchange in time to hold initial public offerings next year, which would explain why the list has not been officially publicized or finalized.

Finally, there is also concern that some of Kazakhstan’s elite may push back on privatizing any asset that supports their position, power base or finances. The country’s business elite have some powerful brokers in the president’s family, such as his son-in-law, Timur Kulibayev. They have repeatedly protected their interests over those of the Kazakh people, government and foreign investors, forming yet another barrier to the government’s plans to help its struggling economy.

This article is extracted from a Stratfor Report