There are more scary things than an angry woman, believe it or not. Beyond guns, you’d be surprised to learn which weapons can do the most damage. We decided to put together a list for all of you who are interested to learn about some of these instruments of fear and destruction. here’s a Top […]

There are more scary things than an angry woman, believe it or not. Beyond guns, you’d be surprised to learn which weapons can do the most damage. We decided to put together a list for all of you who are interested to learn about some of these instruments of fear and destruction. here’s a Top 10 of the scariest weapons ever created by man!

This short barreled, rifled muzzle-loader lived up to its name (and more!) with a total weight of 103 tons. Though it was commissioned for the coastal defense of Great Britain from 1877 to 1906, its comparatively short range of only 3.7 miles made its usefulness subject to debate. Still, its 2,000 pound shells packed a serious wallop. 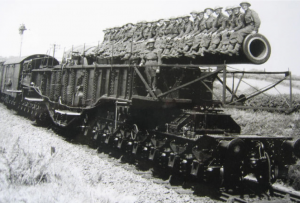 The Pariser Kanonen (Paris guns in english) are seven very long-range artillery pieces used during World War one by the Germans to bombard Paris between March 23 and August 9, 19181. known as “Grosse Bertha” by the French (but this name means another gun among the Germans), they fired at a distance of more than 120 km  in a little more than 4 months, they sent 367 shells on Paris and the surrounding communes, causing the death of 256 people. 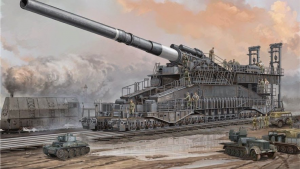 Schwerer Gustav – This was the name given to a German 80 cm railway gun, a huge piece of artillery designed to be shot from a railway wagon. It was developed in the late 1930s by Krupp of Essen as artillery for the explicit purpose of destroying the main forts of the French Maginot Line during a siege. At the time, these were the strongest fortifications in existence.

‘Gustav’ could fire shells weighing seven tons to a distance 47 kilometers. When fully assembled the ‘Schwerer Gustav’ weighed nearly 1,350 tons. The Germans designed this piece of artillery to prepare for the Battle of France. The biggest gun of WW II was not ready to do battle when the battle began. But it didn’t really matter because the Wehrmacht’s Blitzkrieg aggression through Belgium rapidly outflanked and isolated the Maginot Line’s static defenses, forcing them to surrender without any major losses and making the destruction of the fortifications unwarranted.

‘Schwerer Gustav’ was deployed later during the war to the Soviet Union. During the artillery bombardment of Sevastopol, which was part of Operation Barbarossa, among other things, the large gun destroyed an ammunition warehouse buried in layers of rock under a bay.

Leningrad was the next stop for the 80 cm gun and probably was planned to be used in the Warsaw Uprising like other German heavy artillery weapons, but the rebellion was crushed before the heavy artillery was needed. The Germans demolished ‘Schwerer Gustav’in 1945, near the very end of WWII, so it wouldn’t be confiscated by the Soviet Army.

There are only two weapons that have larger caliber weaponry – the British Mallet’s Mortar and the American Little David mortar (both 90 cm). 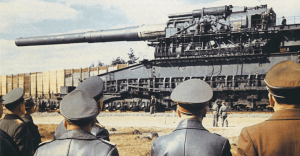 The V-2 rocket, a Nazi innovation, was first used to bomb London during 1944. The War saw more than three thousand V-2’s launched. 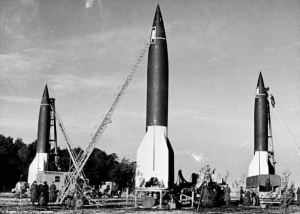 They were responsible for killing at least 2,754 people just in London. They also destroyed so much property that it precipitated a housing crisis.

They were built by concentration camp prisoners, thousands of whom died in the process.

The Intercontinental Ballistic Missile (ICBM) is a ballistic missile that is guided to the target. It can travel at least 3,400 miles and was built primarily for transporting nuclear weapons.

ICBMs have the capability of being launched from airplanes, submarines, missile silos, and vehicles. They became an integral part of the MAD doctrine because these weapons allowed the flexibility that enabled the country to strike back and destroy the enemy. It basically guaranteed a second strike on the enemy.

With the advancing of technology, it came to fruition that an ICBM could be used to launch several nuclear warheads at once because of the MIRV. 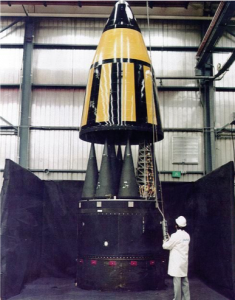 The MIRV, which is a Multiple Independently Targetable Re-entry Vehicle, is a payload for ballistic missiles that contains multiple warheads.

Each warhead has the capability of being aimed to hit one of many targets. The old fashioned warheads could only transport a single nuclear bomb on a single missile and aim for a single target.

The next step was the multiple reentry vehicle (MRV) missile that could carry numerous warheads that were all dispersed but not individually aimed which resulted in a blast similar to a shotgun.

The MIRV solved that problem, all warheads were now targetable. 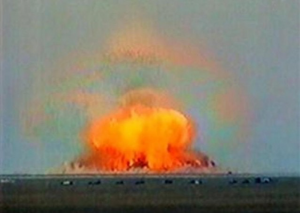 “All that is alive merely evaporates,” is the quote Russian Deputy Chief of Russian General Staff Alexander Rukshin shared when asked about their newly developed bo  In 2007 the Russians successfully tested and released their “Aviation Thermobaric Bomb of Increased Power”, quickly nicknamed the “Father of All Bombs” (FOAB).

The FOAB is reportedly 4 x more powerful than the US military’s biggest non-nuclear bomb, the GBU-43/B Massive Ordnance Air Bomb which is officially designated with the acronym “MOAB” and known popularly as the “Mother of All Bombs.”

This makes the Russian device officially the most powerful conventional non-nuclear weapon in the world.

The FOAB replaces several smaller nuclear bombs in the Russian arsenal. It yields an equivalent of 44 tons of TNT while just using only seven tons of a new high explosive.

Its blast and pressure wave has a similar effect to a small nuclear weapon, just on a smaller scale. The bomb detonates in mid-air causing a supersonic shockwave and extreme temperatures.

Thermobaric weapons generate longer, more sustained blast waves with higher temperatures as compared to conventional explosives. Because of this, they produce more damage over larger areas than conventional weapons of similar mass.

They also differ in that they use oxygen from the atmosphere itself rather than relying on an oxidizing agent in their explosives. They produce more energy than normal happens and as a result are more difficult to control.

These two infamous nuclear bombs were dropped in Hiroshima and Nagasaki during WWII, changing the course of our history. Named after film characters, these horrifying nuclear bombs gave us the most shocking memory of what a nuclear warfare can do to the world. 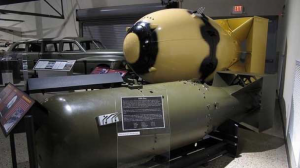 Every aspect of the phrase, ‘weapons of mass destruction,’ applies to the Tsar Bomba. The weapon was the Soviet Union’s rebuttal to the United States nuclear program. A massive device, designed to decimate everything, that’s what the bomb was. Only one was ever detonated, and that was enough.

Tsar Bomba remains the most powerful device ever detonated by mankind. To compare, the most powerful device the United States ever created was the B41. It was also the only three-stage nuclear device the U.S. created. The B41 had a maximum yield of 25 megatons TNT, while the Tsar Bomba had a maximum yield of 100 megatons of TNT.

Of course, the most powerful nuclear bomb ever detonated had a massive mushroom cloud. The mushroom cloud is estimated to have gone as high as 40 miles in the sky, which is about seven times as tall as Mount Everest. At this height, the cloud went through the stratosphere as well as the mesosphere.

The bomb also unleashed a massive fireball to accompany the mushroom cloud. Once detonated, the fireball nearly reached the height at which the bomb was dropped and was visible more than 600 miles away from the site.

The bomb was essentially built to flex the Soviet Union’s military strength. Because of this, the bomb was so huge that it was basically too huge. What does this mean? It means that it wasn’t practical for wartime use. For one, moving the bomb around was simply too complicated. It didn’t even really fit on the jet that dropped it from the sky; that plane had to be heavily modified for the bomb. Second, the crew on the plane only had a 50% chance at survival. All of this comes even after the bomb was scaled down from its original 100 megaton size. 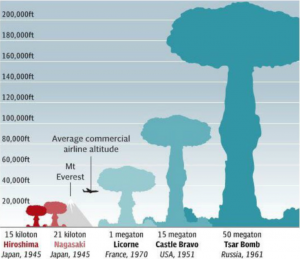 The use of biological weapons, or bioweapons, dates back to the ancient world. As early as 1,50­0 B.C. the Hittites of Asia Minor recognized the power of contagions and sent plague victims into enemy lands. Armies, too, have long understood the powe­r of bioweapons, catapulting diseased corpses into besieged fortresses and poisoning enemy wells. Some historians even argue that the 10 biblical plagues Moses called down against the Egyptians may have been more of a concentrated campaign of biological warfare rather than the acts of a vengeful god.

Since those early days, advances in medical science have led to a vastly improved understanding of harmful pathogens and the way our immune systems deal with them. But while these advancements have led to vaccinations and cures, they have also led to the further weaponization of some of the most destructive biological agents on the planet.

The first half of the 20th century saw the use of the biological weapon anthrax by both the Germans and Japanese, as well as the subsequent development of biological weapons programs in nations such as the United States, the United Kingdom and Russia. Today, biological weapons are outlawed under 1972’s Biological Weapons Convention and the Geneva Protocol. But while a number of nations have long destroyed their stockpiles of bioweapons and ceased research into their proliferation, the threat remains. 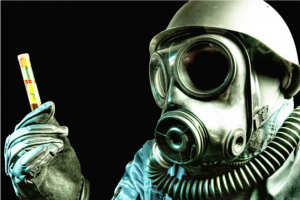