There is no plan to involve the U.S. military in what is happening in Ukraine, even if Russia takes more territory. Ukraine borders Russia, and Ukraine does not belong to NATO, where an attack on one member is deemed to be an attack on all.

American officials are worried that 50,000 Russian troops being massed near the Ukraine border and within Crimea, the pro-Russian peninsula recently annexed by President Vladimir Putin, aren’t there for just a training exercise

Despite Russian reassurances that Moscow’s troop buildup along Ukraine’s eastern frontier is for a military exercise, its growing scale is making U.S. officials nervous about its ultimate aim.

President Barack Obama on Friday urged Russia to stop “intimidating” Ukraine and to pull its troops back to “de-escalate the situation.” He told CBS that the troop buildup may “be an effort to intimidate Ukraine, or it may be that [Russia has] additional plans.”

Pentagon officials say they believe there could be close to 50,000 Russian troops bordering the former Soviet republic and inside Crimea, recently seized and annexed by Moscow. That estimate is double earlier assessments, and means Russian President Vladimir Putin could order a lighting strike into Ukrainian territory with the forces already in place. The higher troop count was first reported by the Wall Street Journal.

“We continue to see the Russian military reinforce units on their side of the border with Ukraine to the south and to the east of Ukraine,” Rear Admiral John Kirby, the Pentagon spokesman, said Thursday. “They continue to reinforce and it continues to be unclear exactly what the intent there is.”

State Department spokeswoman Marie Harf played down the notion that there are as many as 100,000 Russian troops now bordering Ukraine, as Olexander Motsyk, the Ukrainian ambassador to the U.S., said Thursday on Capitol Hill. “I hadn’t actually seen the hundred-thousand number,”

Harf said. “There are huge numbers of Russian troops on the Ukrainian border. … We are concerned about Russia taking further escalatory steps with whatever number of tens of thousands of troops they have there, and have called on them not to do so.”

Washington got those assurances that the Russian troop buildup was only an exercise from Russian Defense Minister Sergei Shoigu a week ago. But no one in the U.S. government knows if Putin agrees — or if the Russian leader has changed his mind as the West has debated what level of economic and political sanctions might be imposed if Moscow takes an additional chunk of Ukraine beyond Crimea. “They made it clear that their intent was to do exercises and not to cross the border,” Kirby said. “Our expectation is they’re going to live up to that word.”

As a result of all this, two important things happened. First, Ukraine became a country in a meaningful way. In the 23 years since it became independent from the USSR, Ukraine could not decide whether it was going to become a law-abiding, European nation of shopkeepers like its Western neighbor (and some-time ruler), Poland – or take its place alongside Belarus and Kazakhstan in a revived Russian Empire of kleptocratic dictatorships.

Lawmakers suggested that the world is abandoning Ukraine. “It appears to me Ukraine was left defenseless over the last two decades,” said Rep. Marcy Kaptur, D-Ohio.

Vladimir Putin settled that question once and for all. Without the Russian-speaking population of Crimea, Donetsk and Lugansk, there will never again be a pro-Moscow government in Kiev. At the end of October strongly pro-European parties swept to power in the Rada, Ukraine’s parliament. At the same time the European Union and Nato found – for the time being at least – the mettle to agree on sanctions in Russia and economic and logistical support for Ukraine.

The war for the East continues. The economy teeters. The ultra-nationalists may not have done well in recent elections but they are armed and organized into self-governing “patriotic battalions” fighting independently of the government’s command. A recipe for disaster of Yugoslav proportions, perhaps. And yet most Ukrainians remain surprisingly hopeful. “We found out who we are. And who are aren’t,” says Ruslana Khazipova, a young singer with the band Dakh Daughters. “We are free. And we aren’t Russia’s bitch any more.” 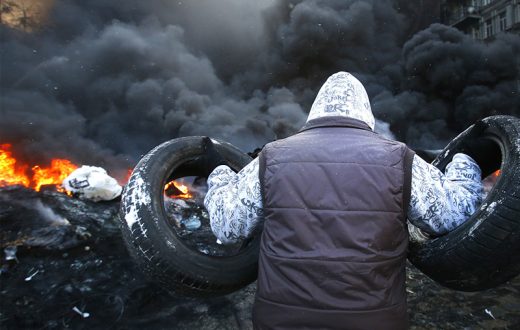