For two years, trade war has not met its end. The rivalry between the US and China keeps continuing and showing no sign of ending. Several talks have been held, but no solution produced. Global economic direct and indirectly affected because of two economic superpower doing rivalry. Some says that it is a cold war […]

For two years, trade war has not met its end. The rivalry between the US and China keeps continuing and showing no sign of ending. Several talks have been held, but no solution produced. Global economic direct and indirectly affected because of two economic superpower doing rivalry. Some says that it is a cold war or just simply trade war because US suffered economic loss from China in export and import practice. But, I rather interest in the term of technology war and it relate with China’s ambitious target in 10 years in the form of Made in China 2025.

Made in China 2025 (MIC 2025) is one of the most ambitious projects alongside Belt and Road Initiative. Their aims are to reduce dependency of foreign technology and increase self-reliance or in other words, making domestic product dominant in internal market. MIC2025 targeted that China’s fulfilled 40% with domestic industries and 70% in 2025. Made in China 2025 project focus on 10 strategically industries which is railway transportation, new energy vehicle, aerospace, naval engineering, robotic and artificial intelligence and many more. That project has been design in 2015 and it’s been four years since the announcement. However, trade war conduct by Trump administration has made China’s quite busy.

There has been said that trade war is only the face of the media when in reality, rivalry between China and US is about technology. Trump administration accused China with intellectual property right violation and discrimination practice in trade and investment. Of course, 10 years target required quite dramatic steps, as acquisition and joint ventures become significant in achieving Made in China 2025. Even though China’s has been recognized as a great power, they are still relies on foreign technology which is why they want to reduce it. Achieving self-reliance is vital to China for their development and exit from middle income trap.

It is understandable that one state wants to be self-reliance, especially when state are growing and evolve into great power status. Furthermore, they have immense economic power which I see is their specialty. They may have not great military capabilities compare to US or technology supremacy, but China has strongest weapon in the form of economic. With their deep pocket, achieving such an ambitious project is easier, given that Belt and Road Initiative which China have invest considerable amount of money in Kenya, South Africa, Pakistan and Kazakhstan.

Achieving technological self-reliance in 2025 is possible if they have not follows international rules and norms. However, attain target Made in China 2025, (only six years left) is difficult due to two reasons:

For US, maintaining supremacy is important as it is their job maintaining global order. China has surpassed their economic capacity, if they loss against in sector which they excel for more than decades, they will be lose its legitimacy as superpower and hegemonic power. Even though China doesn’t aim to be superpower status, its behavior said differently. I think terminology “Peaceful Rise” or “Peaceful Development” that China has campaign is right but it has another meaning. China will be rise, not by deterrence or military power, instead with economic power. They will still and continue to follow international norms and as much as possible shows cooperative behavior and harmonious relations with another country.

It will be delightful scenario for China. Self-reliance is achieved and China will become technology powerhouse alongside US. There will be some positive effect to China, but I will give some analyst on two topics: political, security, geo-economics and geopolitics.

If Made in China 2025 become success, China’s status in International system will be elevated. Media around the world will be said that China is likely superpower country, accompany US to maintain order. (Although I denied China’s status because for me superpower required excel in all strategic sector: military, economic, politics, technology, culture, norms and ideology). China’s voice will be much heard considering they have primacy in technology and economic. They have place in almost every multilateral and regional forum also gaining respect from the world

As for security, primacy in technology would increase military capabilities, either in firepower, mobility, intelligence, communication and protection. Artificial Intelligence, robotics technology will increase in communication and intelligence area. Their military will be revolutionizing in a way that it threatens US military power in such a way. Although I assume that China’s military still cannot compete with US, technological advancement will compensate their lack and improving the quality of their military force.

In geo-economics, there will be competition between US and China whose product are more achievable, cheaper and more sophisticated. The competition is really fierce considering that China has advantages in demography and cheap labor compare to US. However, those two have their own innovation area: one in Silicon Valley, the other in Shenzhen and Guangzhou.

In geopolitical, one of the Made in China 2025 key sector is naval engineering which I assume that technological advancement which China’s have will elevate naval force capabilities and enhancing their blue water navy catching up with US. I remember Alfred Thayer Mahan theory that if you want to conquer the world, naval capabilities must stronger than anyone else. Furthermore, China’s naval capabilities still below United States. However, besides enhancement in naval forces, we will see artificial intelligence and big data rivalry between US and China. 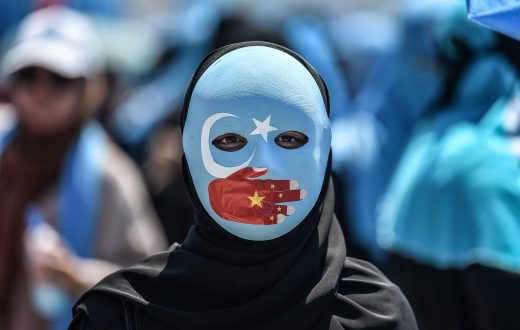