At last! After three weeks of waiting, China can celebrate the successful landing of the Chang’e 4 mission. Thursday, January 3 at 10:26 a.m. Beijing time (3:26 a.m. Paris time), the lander, which had left Earth on December 8, touched down on the lunar ground with a lunar exploration device on board, after a twenty-one […] 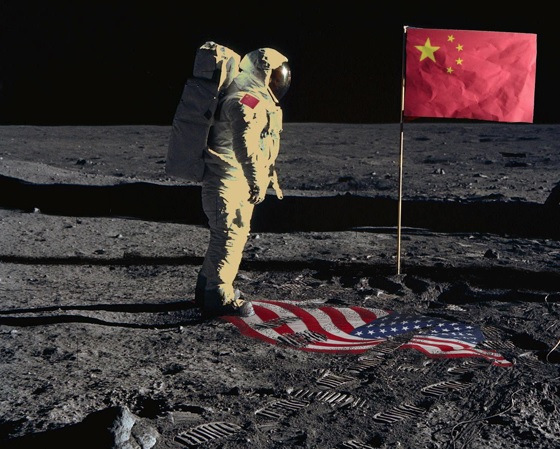 At last! After three weeks of waiting, China can celebrate the successful landing of the Chang’e 4 mission. Thursday, January 3 at 10:26 a.m. Beijing time (3:26 a.m. Paris time), the lander, which had left Earth on December 8, touched down on the lunar ground with a lunar exploration device on board, after a twenty-one day trip into space. He took a first picture of the little-known surface of the Moon, transmitted by the Queqiao satellite sent into lunar orbit in May 2018. A few hours later, the patroller made his first wheel turns on the lunar dust.

“A major event in the conquest of space,” enthuses the nationalist daily Global Times. On the national television platform of CCTV, the spokesman for the Chang’e 4 programme shines: “This is a major event for China, which is asserting itself as a great space power! »

This success is crucial for the Chinese space programme, with a view to a first manned flight by 2022. For the first time, Beijing is no longer a follower: everything that Chinese space had accomplished so far had already been achieved by the Americans or Russians – the first to photograph the hidden face of the Moon in 1959 – decades ago.

“In the past, space exploration successes were reserved for the United States and the USSR. The successful landing of Chang’e 4 shows that China is also a scientific power in deep space exploration,” Chen Xuelei, deputy director of the cosmology department of the national astronomical observatory, told the World.

China is finally the first to install a device in an unexplored, little-known territory that poses technological challenges. First of all, because the dark side of the Moon is also the most hostile, with its rough relief and deep craters that complicate any approach.

Then because communication with a device placed on this side of the Moon always hidden from the Earth is difficult, the lunar mass being a barrier to radio communications. In May 2018, Beijing had therefore sent a satellite, now positioned 65,000 kilometres behind the Moon, to provide a relay for transmissions. “The place, the time, everything went exactly as we had anticipated,” said Sun Zezhou, the mission’s chief engineer, on national television.

This national celebration comes after a long wait in an anxious silence, because there are many risks for a mission of such difficulty. In the days leading up to the moon landing, the Chinese space programme did not provide any information: there was no question of reminding the general public that a Chinese rocket could land successfully as well as crash, defeating China’s hopes for a space conquest. While NASA offers live monitoring of smaller missions, only rumours were available to estimate when the Chinese probe would hit the lunar ground.

This is the second Chinese mission to touch the Moon, after Chang’e 3 and its “Jade Rabbit” (Yutu) whose adventures had captivated the Chinese in 2013. A mixed success since the robot had stopped after only a hundred meters. But it had continued to send signals intermittently to Earth for 31 months, giving a decisive boost to the country’s space programme.

Chang’e 4 carries with him six Chinese scientific experiments and four others provided by foreign teams. The rover, which is to be named soon following the results of a public competition, is expected to collect data for one or two months before dying.

One of the main interests of the mission will be to explore the universe. Indeed, the position of the rover on the hidden face of the Moon opens up a scientific opportunity: sheltered from the Earth’s radio signals, the devices on board the probe should be able to pick up signals that are still unknown.

“Sounds of the Universe”

“For astronomers, this is a unique observation post: we can pick up signals that are not audible on Earth. Chang’e is carrying with it new low-frequency radio spectrum detectors, for which we have worked with the Netherlands. We will be able to study the explosion of the Sun, the environment of the Moon, the low-frequency fields of the planets of the Solar System, and listen to the sounds of the universe,” enthuses Chen Xuelei.

But Chang’e 4’s primary mission remains the exploration of the Moon, its topography and geology,” says Professor Chen. The Chinese probe landed in the Von Karman crater, the oldest and deepest crater on the Moon. Chang’e 4 could be used to study the origins and evolution of the Earth’s satellite. The basin could also be rich in mineral resources, a development opportunity for future Chinese space missions.

Also read Ultima Thule, a surprising red “snowman” at the edge of the solar system
The current mission is another step in China’s ambitious exploration program. Chang’e 5 is expected to continue lunar exploration this year by taking mineral samples to bring them back to Earth. By 2021, China plans to have a reusable rocket launcher in service.

A decisive step for Beijing

In the medium term, Beijing is also preparing to launch a rocket capable of carrying heavier loads than NASA, manned flights in space, and an exploration mission to Mars. This is enough to compete directly with American space ambitions. Lunar exploration is of limited scientific interest in itself, but it is a decisive step in the conquest of space.

Philippe Coué, a specialist in the Chinese space program and author of Shenzhou, the Chinese in Space (The Spirit of Time, 2013), recently considered that “the scientific interest of the Moon for China consists in having its own data to prepare its future automatic and manned missions – knowledge of the lunar regions to develop its devices and to search for the most interesting areas to exploit scientifically and possibly mining”.