Summary The European Union is fragmenting, and Russia is becoming more active in its former Soviet sphere of influence. In such upheaval, it is no surprise that a string of countries running from the Baltic Sea down the Carpathians to the Black Sea is slowly developing a common interest in countering Moscow while chafing under […]

The European Union is fragmenting, and Russia is becoming more active in its former Soviet sphere of influence. In such upheaval, it is no surprise that a string of countries running from the Baltic Sea down the Carpathians to the Black Sea is slowly developing a common interest in countering Moscow while chafing under Western European interference. This is especially true of Poland, which sees itself as the natural leader of Central and Eastern Europe. But uniting these countries, whose agendas often conflict with one another and with Poland’s, will not be easy.

Since taking over the Polish government in October, the Law and Justice party has based its domestic governing strategy on introducing measures that extend the party’s political control of the country. Abroad, Warsaw has signaled that it will resist aspects of EU integration while seeking to strengthen its ties with other Central and Eastern European countries. Both strategies are meant to prepare Poland to handle EU divisions and potential Russian aggression.

In some ways, Poland is beginning to follow in Hungary’s footsteps by distancing itself from Brussels. Yet unlike Hungary, Poland is more ready toresist Russian influence in the region. Such contradicting trends pervade the countries between the Baltic and Black seas. Many share common features, including young democracies, painful memories of Soviet domination and growing doubts about the future security of the European Union. But these countries also have their own priorities and interests. Thus Poland’s cooperation with the rest of Central and Eastern Europe (specifically with Hungary, Romania, Lithuania and Slovakia) will most likely happen on a case-by-case basis, making a completely unified region unlikely but working with each country on specific interests no less important.

As Europe becomes more divided, the economic and security benefits that should have come from partnering with the European Union are no longer apparent or certain for some Eastern and Central European countries. For that reason alone, Poland and Hungary are and will remain critical of EU institutions. They will defend measures to freeze the process of Continental integration while trying to take back national prerogatives that were transferred to Brussels. Warsaw and Budapest will work together to resist the European Union’s attempts to enforce a scheme to relocate asylum seekers across the Continental bloc. They will also support the United Kingdom’s push to introduce safeguard measures for EU members that are not part of the eurozone. Ultimately, Polish-Hungarian relations will improve, as a well-received meeting between Hungarian Prime Minister Viktor Orban and Law and Justice leader Jaroslaw Kaczynski on Jan. 7 suggests. Simply put, Hungary’s ruling Fidesz party and Poland’s Law and Justice are ideologically close: Both seek to expand the central government’s influence on the economy, the media and the political system. 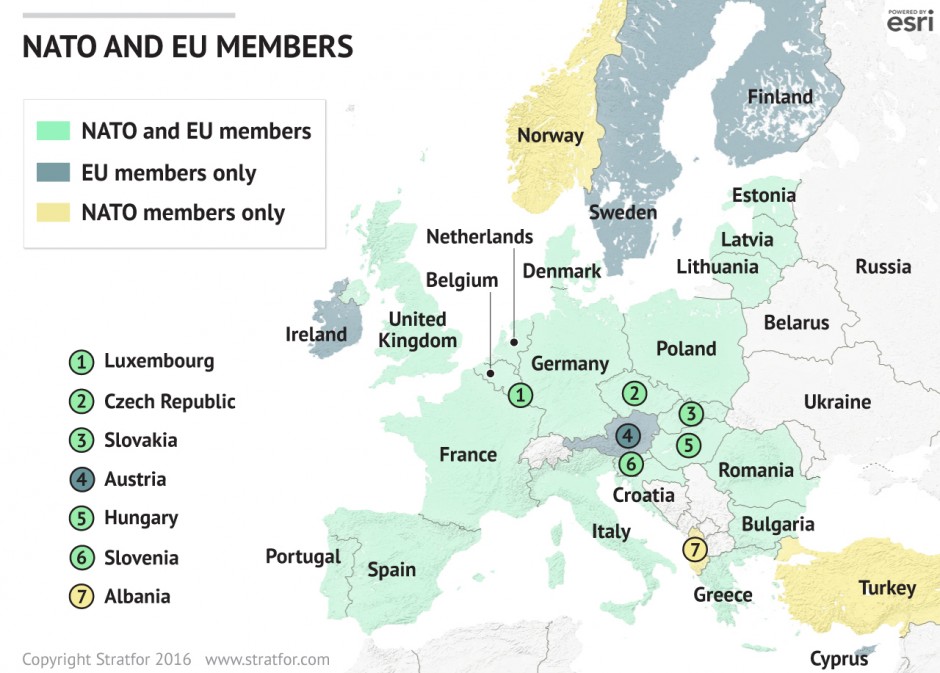 Poland will also work with other governments in the region. The Law and Justice government, like the previous administration, is interested in extending Poland’s alliances beyond the Visegrad Group (a political alliance that comprises Poland, Hungary, the Czech Republic and Slovakia) by strengthening ties with Romania. And while Poland and Romania, two of the largest recipients of EU agricultural and structural funds, will likely negotiate together to protect the continuity of both programs, they will also simultaneously resist Brussels’ plan to relocate asylum seekers by refusing to enforce it.

Similarly, Slovakia and Poland mistrust some EU policies, especially those concerning the immigration crisis. Under Slovak Prime Minister Robert Fico and his socially conservative Smer-Socialist Democratic Party (Smer-SD), Slovakia was among the first to oppose an EU plan to relocate asylum seekers. Fico even threatened to take the plan to the European Court of Justice and said the country would not accept any Muslim asylum seekers after the Paris attacks were connected to the immigration debate. Since then, the government has been courting nationalist voters in an attempt to win a majority in parliament during upcoming general elections on March 5. Fico is currently leading the opinion polls, implying some support for his Euroskeptic vision and room for cooperation with Poland.

To the east, the fear of Russian aggression is a unifying factor to some degree as well. Romania and Lithuania share Poland’s views when it comes to Russia, supporting stronger ties with NATO in the region and the existing regime of sanctions. Poland, Lithuania, Romania and Slovakia are also concerned about the dominance of Russian energy and will cooperate to reduce their dependence on it. Poland and Lithuania recently opened LNG terminals, and in late December 2015, Lithuania inaugurated electrical links to Poland and Sweden that will reduce its reliance on Russian electricity. Romania and Poland also want to construct pipelines, interconnectors and LNG terminals while developing their own domestic energy resources.

Meanwhile, the Ukraine crisis has somewhat changed Slovakia’s calculations. First, Moscow reduced its natural gas supplies to Slovakia after Bratislava sent natural gas to Ukraine through reverse natural gas flows. Second, Slovakia is concerned about Russia’s plans to build pipelines that bypass Ukraine as a transit state. Consequently, Slovakia will join Poland in opposing Nord Stream II, a pipeline project that would deliver natural gas to northern Europe, bypassing Ukraine and Slovakia. Of course, Warsaw is mostly focused on Nord Stream II’s political implications, since the pipeline would bind Germany and Russia closer together — a worrying development given Poland’s history of insecurity between two regional powers. Slovakia is instead concerned about the financial impact of the project, which would cost it billions in lost revenue from transporting Russian natural gas exports to Europe.

Yet differences between Poland and its peers abound. Poland and Hungary have different views when it comes to Russia that would stifle any nascent alliance. Law and Justice wants to take a hard stance against Moscow by extending the current EU sanctions and deploying NATO troops in Eastern Europe. Hungary, on the contrary, wants a more balanced approach that would include de-escalating tensions with Russia and lifting sanctions to normalize ties and protect Russian investment and energy supplies to Hungary.

Slovakia, like Hungary, also supports a more accommodating policy regarding Russia, because, though Ukraine’s crisis has disturbed its energy security, its natural gas and the fuel for its Russia-built nuclear power plants still come from Russia. In addition, Slovakia has more misgivings about NATO’s presence in the region than does Poland. Fico has said that he will preserve Slovakia’s strong ties with the military alliance but that he is against the permanent stationing of foreign troops on Slovakian soil. The Slovak government was critical of a recent move by Poland to raid a NATO counterintelligence center in Warsaw run jointly by Poland and Slovakia. Finally, Slovakia will assume the rotating presidency of the European Union in the second half of 2016, which will probably force Bratislava to mediate between the bloc’s conflicting interests.

Lithuania, in turn, shares Poland’s views on Russia but does not support its Euroskeptic positions. A small nation surrounded by powerful countries, Lithuania is fully committed to EU integration. Unlike Poland, Lithuania is also a member of the eurozone. Germany could pressure Lithuania not to support Poland’s resistance to enforcing EU policies. Moreover, Poland’s nationalist government could clash with Lithuania on the protection of the rights of Polish minorities in the country. Still, because Poland will probably come into conflict with EU institutions several times this year, especially if the European Commission moves to punish Warsaw for its recent media reforms, Lithuania could become an honest broker to ease tension between Warsaw and Brussels.

In the meantime, Romania’s unsettled political system will continue to prevent a strong central government from emerging, let alone one that can emulate Poland’s, at least for another year. Romania has a semi-presidential system that distributes power between the president and the parliament. The Romanian president supports EU integration, but the caretaker government led by a former European commissioner is not strong enough to make bold moves. A victory by the conservatives in the general elections this December could make Romania more Euroskeptic, but such changes would only become apparent in 2017.

Poland’s new government will not dramatically change the country’s foreign policy or the geopolitics of Central and Eastern Europe. Many of the government’s priorities are in line with those of its predecessors. However, Law and Justice’s vocal policies will reaffirm the disenchantment with Continental integration already pervasive in the region. Warsaw’s ideological affinity with some of its peers could enable more regional cooperation to resist attempts by Brussels (and Berlin) to shape the direction of the bloc. Law and Justice will also push for a harder stance against Russia and a larger presence of NATO in the region.

But Central and Eastern Europe is still too heterogeneous to form a cohesive bloc. While Poland can partner with Hungary, Romania, Lithuania and Slovakia on a host of issues, their goals will also conflict on many others; the common interests that bind Warsaw with one potential ally distance it from another.

Beyond the European Union, Turkey could eventually become part of a loose alliance of countries encircling Russia. Polish assertiveness on Europe’s eastern front could easily complement Turkey’s influence on the Black Sea, especially as Ankara’s relationship with Moscow has worsened in recent months. Romania, the largest EU member with strategic interests in the Black Sea, would also be a key player in such a structure. After all, Bucharest is concerned about Russia’s military presence in Crimea and Moldova. Of course, this union is still undeveloped and may never materialize into a formal alliance. To be effective, it would also require more active support from the United States. But interests in Eastern Europe are becoming increasingly aligned, however slowly, and Poland will no doubt be a part of it.